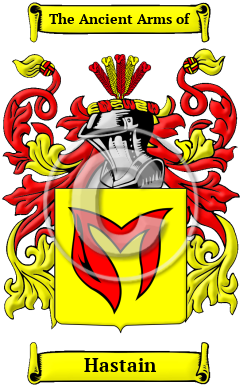 The Hastain family claim the land of colorful tartans and skirling bagpipes as their ancient homeland. In Scotland, hereditary surnames were adopted according to fairly general rules and during the late Middle Ages, names that were derived from localities became increasingly widespread. Local names originally denoted the proprietorship of the village or estate. The Norman knight Robert of Hastings distinguished himself at the Battle of Hastings and was granted the town of Hastings by William the Conqueror as reward.

Early Origins of the Hastain family

The surname Hastain was first found in Sussex, where the family were descended from Robert of (de) Hastings, who having assisted William the Conqueror at the Battle of Hastings, was given the town of Hastings in gratitude. He became Mayor of Hastings. [1]

Another branch that some claim to be older, was found at Fillongley in Warwickshire. "This place, the name of which is variously written in Domesday Book, is supposed to have been the earliest seat of the rich and powerful family of Hastings, who held many offices of distinction during several reigns." [2]

Another source confirms the Warwickshire entry: "Robert, Steward to William of Normandy, accompanied the expedition to England, and was rewarded with the Lordship of Fillongley, Co. Warwick. He received also the appointment of Portgrave of Hastings, and thence arose a surname, which his illustrious descendants rendered renowned in the cabinet and in the field. Robert's successor, Walter de Hastings, became steward to Henry I., as owner of the manor of Ashills, co. Norfolk, which he held on condition of taking charge of the naperie (table linen) at the Coronation. His descendant, Henry de Hastings, Baron Hastings, married Ada, daughter of David, Earl of Huntingdon, and was father of the bold defender of Kenilworth Castle, Henry, Lord Hastings, whose grandson, John Hastings, seneschal of Aquitaine, was one of the aspirants to the Scottish throne, A.D. 1290, in right of his great grandmother, Ada, who was niece to William the Lion. " [3]

Henry de Hastings (c.1235-c.1269) was created Baron in 1264 by Simon de Montfort. He led the Londoners at the Battle of Lewes. His son John Hastings, 1st Baron Hastings (1262-1313) fought in the 1290s wars in the Scotland, Ireland and France under King Edward I. His son, John Hastings, 2nd Baron Hastings (1287-1325) served in the First War of Scottish Independence under King Edward II and later became Governor of Kenilworth Castle.

"Sir William Hastings, created Baron Hastings by Edward IV., and who was beheaded by Richard III., built a strong castle [in Ashby-De-La-Zouch in Leicestershire] in the reign of the former monarch, in which Mary, Queen of Scots, while in the custody of the Earl of Huntingdon, was for some time kept in confinement. Ashby Castle was garrisoned for his majesty by the earl's second son, Col. Henry Hastings, who was made general of the king's forces in the midland counties, and, for his services to the royal cause, was in 1643 created Baron Loughborough." [2]

Again in England, another early record was found at Aston-Cantlow in Warwickshire. "John de Hastings, into whose possession it had come, claimed by prescription, in the 13th of Edward I., a court leet, with assize of bread and beer, weifs, gallows, and free warren, all which were allowed." [2]

We found this rather unpleasant entry for one Simon Hastings in Torquay, Devonshire: "William Norton, was charged, in 1390, with having abused his powers as lord of the manor by cutting off the head of a canon named Hastings. The canon was produced in the flesh to satisfy Bishop Brantyngham that he was not dead ; and the Bishop took him at his word. Other people, however, were not so easily satisfied ; and therefore to this day the headless ghost of Simon Hastings makes hideous the dull November nights by galloping a spectral horse through Torre avenues." [4]

Early History of the Hastain family

Spelling variations of this family name include: Hastings, Hasting, Haistings and others.

Migration of the Hastain family to Ireland

Some of the Hastain family moved to Ireland, but this topic is not covered in this excerpt. More information about their life in Ireland is included in all our PDF Extended History products and printed products wherever possible.

Hastain Settlers in New Zealand in the 19th Century