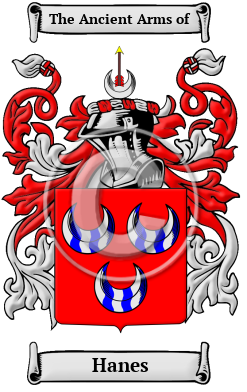 The Hanes family name is linked to the ancient Anglo-Saxon culture of Britain. Their name comes from the baptismal name for Haine. As the naming tradition grew in Europe baptismal names began to be introduced in many countries. Baptismal names were sometimes given in honour of Christian saints and other biblical figures. There are very few Christian countries in Europe that did not adopt surnames from these religious figures.

Early Origins of the Hanes family

The surname Hanes was first found in the Domesday Book of 1086 where Hagene and Hagana were listed in Herefordshire and Norfolk respectively. [2]

Early History of the Hanes family

Until the dictionary, an invention of only the last few hundred years, the English language lacked any comprehensive system of spelling rules. Consequently, spelling variations in names are frequently found in early Anglo-Saxon and later Anglo-Norman documents. One person's name was often spelled several different ways over a lifetime. The recorded variations of Hanes include Haines, Hains, Hain, Haine, Haynes, Hainson and many more.

Notables of this surname at this time include: John Haynes (sometimes spelled Haines) (1594-1653), English colonial magistrate from Messing Essex, one of the founders of the Connecticut Colony, he was on the committee that drafted the Fundamental Orders of Connecticut, often referred to as one of the first written constitutions Hezekiah Haynes (died 1693), second son of John Haynes of Copford Hall in Essex, was a supporter of the parliamentary cause during the English Civil War Joseph "Jo" Haines (died 1701), sometimes called Count Haines, was a 17th-century actor, singer, dancer, guitar player, fortune teller, author, and member of the King's Company. "After...
Another 119 words (8 lines of text) are included under the topic Early Hanes Notables in all our PDF Extended History products and printed products wherever possible.

In the United States, the name Hanes is the 3,391st most popular surname with an estimated 9,948 people with that name. [8]

Migration of the Hanes family to Ireland

Some of the Hanes family moved to Ireland, but this topic is not covered in this excerpt.
Another 30 words (2 lines of text) about their life in Ireland is included in all our PDF Extended History products and printed products wherever possible.

Hanes migration to the United States +

Thousands of English families boarded ships sailing to the New World in the hope of escaping the unrest found in England at this time. Although the search for opportunity and freedom from persecution abroad took the lives of many because of the cramped conditions and unsanitary nature of the vessels, the opportunity perceived in the growing colonies of North America beckoned. Many of the settlers who survived the journey went on to make important contributions to the transplanted cultures of their adopted countries. The Hanes were among these contributors, for they have been located in early North American records:

Hanes Settlers in United States in the 17th Century

Hanes Settlers in United States in the 18th Century

Hanes Settlers in United States in the 19th Century

Hanes Settlers in Canada in the 18th Century

Hanes Settlers in New Zealand in the 19th Century

Historic Events for the Hanes family +

Suggested Readings for the name Hanes +