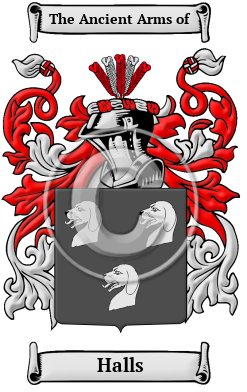 The first bearers of the distinguished surname Halls came to England in the great wave of migration that followed the Norman Conquest of 1066. The name is occupational in origin, stemming from the primary activity of the bearer. It is derived from the Old French term "halle," which referred to a large manor house, which indicates that the original bearer of the name worked at the manor of the local Lord in some role such as a servant or chamberlain.

Not all of the family moved to England, as the Magni Rotuli Scaccarii Normanniae lists Serlo de Haula and Robert de Hala of Normandy in 1198. [1]

"The principal apartment in all old mansions was the hall, and in feudal times it was a petty court of justice as well as the scene of entertainment. The chief servitor when the lord was resident, or the tenant when he was non-resident, would naturally acquire such a surname; and hence its frequency." [2]

Early Origins of the Halls family

The surname Halls was first found in Lincolnshire, England, where the family is directly descended from Earl Fitzwilliam, who held a family seat at Greatford Hall in Lincolnshire after the Norman Conquest. [1]

The younger son of this noble house, Arthur FitzWilliam, came to be known as "Hall" so as to distinguish him from his senior brother. Hence, Arthur Hall was the first known bearer of the name, appearing on record around the year 1090. [1]

"Two principal areas of greatest frequency: one in the north of England in the counties of Northumberland and Durham, where it attains the greatest relative frequency, extending; however, in moderate numbers across the border into central Scotland; the other in the midland counties, especially in Derbyshire." [3]

Early History of the Halls family

In the United States, the name Halls is the 10,070th most popular surname with an estimated 2,487 people with that name. [6]

Migration of the Halls family to Ireland

Some of the Halls family moved to Ireland, but this topic is not covered in this excerpt.
Another 76 words (5 lines of text) about their life in Ireland is included in all our PDF Extended History products and printed products wherever possible.

Halls migration to the United States +

Halls Settlers in United States in the 17th Century

Halls Settlers in United States in the 18th Century

Halls Settlers in United States in the 19th Century

Halls Settlers in United States in the 20th Century

Halls Settlers in Australia in the 19th Century

Halls Settlers in New Zealand in the 19th Century

Historic Events for the Halls family +