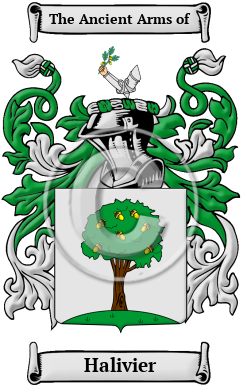 The Halivier surname in Britain is derived from the Old French name "Olivier", a baptismal name originally derived as "son of Oliver." One of Charlemagne's paldins better know as one of the Twelve Peers made the name popular and thus gave it the knightly sound. The Breton variant "Olier" was very popular. [1]

Early Origins of the Halivier family

The surname Halivier was first found in Cornwall and the West country, where a Jordan Oliver was on record in the Assize Rolls of Somerset in 1201, and in the Pipe Rolls for Cornwall in 1204. The personal name Oliverus is on record in the Domesday Book of 1086 and indeed, the first records of the name was in it's personal form. The Hundredorum Rolls of 1273 list Peter filius Oliver in Oxfordshire. [3]

Early History of the Halivier family

Outstanding amongst the family at this time was John Oliver, dean of King Henry VIII's College at Oxford (1532-1545); Thomas Oliver (c. 1601-1679), the second husband of Bridget Bishop, who on 10 June...
Another 32 words (2 lines of text) are included under the topic Early Halivier Notables in all our PDF Extended History products and printed products wherever possible.

Migration of the Halivier family to Ireland

Some of the Halivier family moved to Ireland, but this topic is not covered in this excerpt. More information about their life in Ireland is included in all our PDF Extended History products and printed products wherever possible.

Migration of the Halivier family