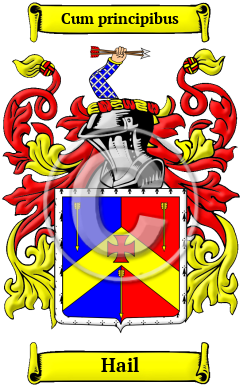 The ancient history of the Hail name begins with the ancient Anglo-Saxon tribes of Britain. The name is derived from when the family resided in a remote valley, or nook. Checking further we found the name was derived from the Old English halh, which had the same meaning. Conversely the name could have been a nickname for someone who was "healthy, stout, a brave man, chief, or hero" having derived from the Anglo-Saxon word "hale." [1]

Early Origins of the Hail family

The surname Hail was first found in Cheshire, but there are other records of this local name throughout England. Parish named Hales were found in Stafford, Norfolk and Worcester. Norfolk's earliest reference was Alexander de Hales, who was listed there in 1245. [2]

Early History of the Hail family

Until quite recently, the English language has lacked a definite system of spelling rules. Consequently, Anglo-Saxon surnames are characterized by a multitude of spelling variations. Changes in Anglo-Saxon names were influenced by the evolution of the English language, as it incorporated elements of French, Latin, and other languages. Although Medieval scribes and church officials recorded names as they sounded, so it is common to find one person referred to by several different spellings of his surname, even the most literate people varied the spelling of their own names. Variations of the name Hail include Hale, Hail, Hailes, Hayles, Hayle, Hales, Haile and many more.

Notables of the family at this time include Sir Frank Hale; Sir Stephen Hales (before 1331-1394), of Testerton, Norfolk, an English soldier and politician; John Hales, the medieval Bishop of Exeter (1455-1456); John Hales (also Hals or Halse; died 1490), Dean of Exeter between 1457 and 1459; Bishop of Coventry and Lichfield in 1459; Lord Privy Seal (1470-1471); John Hales (c.1470-1540), of The Dungeon, Canterbury, Kent, an administrator and Baron of the Exchequer; John Hales (c.1516-1572), a writer, administrator and politician; John Hales (died 1608), the owner of the Whitefriars in Coventry at which two of the Marprelate tracts were printed...
Another 130 words (9 lines of text) are included under the topic Early Hail Notables in all our PDF Extended History products and printed products wherever possible.

In the United States, the name Hail is the 9,827th most popular surname with an estimated 2,487 people with that name. [8]

Migration of the Hail family to Ireland

Some of the Hail family moved to Ireland, but this topic is not covered in this excerpt.
Another 57 words (4 lines of text) about their life in Ireland is included in all our PDF Extended History products and printed products wherever possible.

Hail migration to the United States +

Searching for a better life, many English families migrated to British colonies. Unfortunately, the majority of them traveled under extremely harsh conditions: overcrowding on the ships caused the majority of the immigrants to arrive diseased, famished, and destitute from the long journey across the ocean. For those families that arrived safely, modest prosperity was attainable, and many went on to make invaluable contributions to the development of the cultures of the new colonies. Research into the origins of individual families in North America revealed records of the immigration of a number of people bearing the name Hail or a variant listed above:

Hail Settlers in United States in the 18th Century

Hail Settlers in United States in the 19th Century

Hail Settlers in Canada in the 19th Century