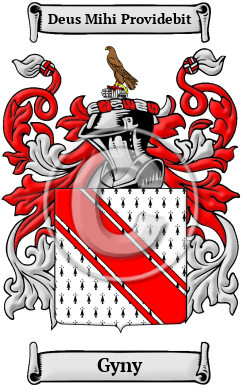 Gyny is one of the names carried to England in the great wave of migration from Normandy following the Norman Conquest in 1066. It is based on the personal name John. The feminine name Jenny was initially a masculine form and modification of the personal name Jenin.The Norman name Gyny descended from Guisnes near Calais in Normandy. The family name Gyny was brought to England after the Norman Conquest, when William the Conqueror gave his friends and relatives most of the land formerly owned by Anglo-Saxon aristocrats.

Early Origins of the Gyny family

The surname Gyny was first found in Suffolk where they held a family seat as Lords of the Manor of Bredfield in that shire where they were granted land by Duke William for their assistance at the Battle of Hastings in 1066 A.D. Conjecturally, they are descended from Peter who held his lands from Hervey de Bourges, tenant in chief. The village was rated in the Domesday Book Survey as a village, a Church and 3 oxen or teamlands. There is also a moated site which was known as Bradfield Castle, although the village is Bredfield. The name Jenney was descended from Guisnes near Calais in Normandy. [1]

Early History of the Gyny family

Spelling variations in names were a common occurrence in the eras before English spelling was standardized a few hundred years ago. In the Middle Ages, even the literate regularly changed the spellings of their names as the English language incorporated elements of French, Latin, and other European languages. Many variations of the name Gyny have been found, including Jenney, Jennie, Jenny, Genny, Gennie, Gynney and others.

Outstanding amongst the family at this time was Edward Jenney of Bredfield House; Sir William Jenny, one of the Judges of the King's Bench in 1477 and John Jenney, early American settler from Leyden in 1623 aboard the Little James. He built the original Jenney Grist Mill in Plymouth Colony in 1636 and was run by him until his death in 1644. Thomas Jenye ( fl. 1565-1583), was a rebel and poet, "whose name appears also as Jeny, Jenny, Jenninges, Genys, Genynges, seems to have been...
Another 83 words (6 lines of text) are included under the topic Early Gyny Notables in all our PDF Extended History products and printed products wherever possible.

Migration of the Gyny family

For many English families, the social climate in England was oppressive and lacked opportunity for change. For such families, the shores of Ireland, Australia, and the New World beckoned. They left their homeland at great expense in ships that were overcrowded and full of disease. Many arrived after the long voyage sick, starving, and without a penny. But even those were greeted with greater opportunity than they could have experienced back home. Numerous English settlers who arrived in the United States and Canada at this time went on to make important contributions to the developing cultures of those countries. Many of those families went on to make significant contributions to the rapidly developing colonies in which they settled. Early North American records indicate many people bearing the name Gyny were among those contributors: John Jenney, his wife Sarah, their daughter Abigail, and son Samuel Jenney, who arrived in Plymouth, Massachusetts in 1623, aboard the "Little James&quot.