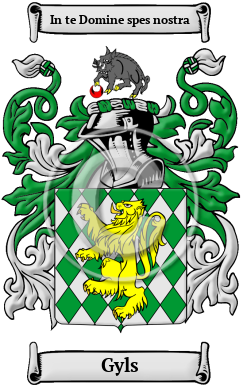 The distinguished Gyls family, which is intricately woven into the intricate tapestry of Scottish history, probably finds its origin with the proud Norman people.

However, Gille or Gillebert (fl. 1105-1145), Bishop of Limerick, "termed by Keating Giolla Easbog, was consecrated in Ireland, but it is uncertain whether he was an Irishman or a Dane, Limerick being then a Danish city. " [1]

How this very early entry fits into the history of the family is uncertain, but we include in as a point of reference.

Early Origins of the Gyls family

Henry Gille moved the family name to Cumberland in 1200 and the family gave its name to the village of Gilsland, a watering-place, in the parish of Lanercost-Abbey, Eskdale ward, E. division of Cumberland. [5]

And it is this branch of the family that we will now focus. "A tradition held by members of the Aberdeen [Scotland] family of this name is that they came originally from Cumberland, where at an early period they owned lands, among others the barony of Gillsland. Gilsland, one of three original baronies in Cumberland, is spelled Gillesland in 1240, and may have been the possession of one Gilli or Gille. Gilli is an old West Scandinavian personal name, borrowed at an earlier period directly from OG. gilla, 'a servant,' or from a pet form of one of the numerous Gaelic names in Gilla-, as Gillebride, Gillechrist, etc. The abbreviated form was not used by Gaels as a proper name, but such usage originated among the Vikings in the West. The surname is of great antiquity on both sides of the Border. Gille filius Boed was one of the witnesses to Earl David's Inquisitio concerning the lands of the church of Glasgow, a. 1124. This Gille son of Boed or Boet stands on a pedestal unique, perhaps in Scottish history, as the last Scottish chieftain to hold sway in England against the power of the Norman." [6]

Indeed the lion's share of the family claim Scotland as their homeland.

Early History of the Gyls family

Spelling variations of this family name include: Gill, Gille, Gills, Gilles, Gyll, Gylls and others.

Notable among the family at this time was Alexander Gill the Elder (1565-1635), High-Master of St. Paul's School, born in Lincolnshire 7 Feb. 1564, was admitted scholar of Corpus Christi College, Oxford, in September 1583, and proceeded B.A. 1586...
Another 39 words (3 lines of text) are included under the topic Early Gyls Notables in all our PDF Extended History products and printed products wherever possible.

Migration of the Gyls family to Ireland

Some of the Gyls family moved to Ireland, but this topic is not covered in this excerpt.
Another 50 words (4 lines of text) about their life in Ireland is included in all our PDF Extended History products and printed products wherever possible.

Migration of the Gyls family