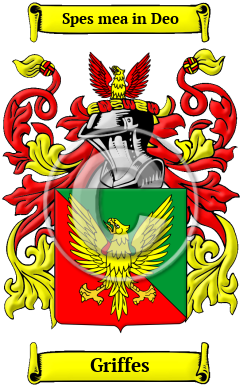 The name Griffes originated with the Anglo-Saxon tribes that once ruled Britain. It is derived from the baptismal name Reeve where as a surname it refers to son of Reeve. In Old English, patronyms were formed by adding a variety of suffixes to personal names, which changed over time and from place to place. For example, after the Norman Conquest, sunu and sune, which meant son, were the most common patronymic suffixes. In the 12th and 13th centuries, the most common patronymic names included the word filius, which meant son. By the 14th century, the suffix son had replaced these earlier versions. Surnames that were formed with filius or son were more common in the north of England and it was here that the number of individuals without surnames was greatest at this time. The surname Griffes also referred to manager or overseer as an occupational surname.

Early Origins of the Griffes family

The surname Griffes was first found in Gloucestershire where Osbert de Grava or De la Grave was found in 1203. From this first entry, the Graveses of Mickleton, Gloucester, ancestors of the gallant admiral Lord Graves, and the Baronets Graves-Saule descend. [1]

Early History of the Griffes family

One relatively recent invention that did much to standardize English spelling was the printing press. However, before its invention even the most literate people recorded their names according to sound rather than spelling. The spelling variations under which the name Griffes has appeared include Grieves, Grieve, Greve, Greves, Greeves, Greaves, Greave, Griveson, Greaveson, Greavson and many more.

Notables of the family at this time include Thomas Greaves (fl. 1604), English musical composer and lutenist to Sir Henry Pierrepont, belonging probably to the Derbyshire family of Greaves; Thomas Greaves (1612-1676), an English Orientalist, a contributor to the London Polyglot; John Greaves (1602-1652), an English mathematician, astronomer and antiquary, eldest son. of the Rev. John Greaves, rector of Colemore, near Alresford in Hampshire; Sir Edward Greaves, 1st Baronet (1608-1680), an English physician...
Another 72 words (5 lines of text) are included under the topic Early Griffes Notables in all our PDF Extended History products and printed products wherever possible.

Migration of the Griffes family to Ireland

Some of the Griffes family moved to Ireland, but this topic is not covered in this excerpt.
Another 31 words (2 lines of text) about their life in Ireland is included in all our PDF Extended History products and printed products wherever possible.

Migration of the Griffes family

At this time, the shores of the New World beckoned many English families that felt that the social climate in England was oppressive and lacked opportunity for change. Thousands left England at great expense in ships that were overcrowded and full of disease. A great portion of these settlers never survived the journey and even a greater number arrived sick, starving, and without a penny. The survivors, however, were often greeted with greater opportunity than they could have experienced back home. These English settlers made significant contributions to those colonies that would eventually become the United States and Canada. An examination of early immigration records and passenger ship lists revealed that people bearing the name Griffes arrived in North America very early: Captain Thomas Graves, who traveled on the first ship to Jamestown, Virginia in 1607; Jane Grieves purchased land in Delaware in 1682; Admiral Greaves settled in Savannah, Georgia in 1823.