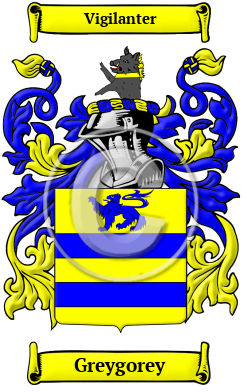 The name Greygorey was spawned by the ancient Anglo-Saxon culture that ruled a majority of Britain. It comes from the personal name Gregory.[1]

Gregory the Great (d. 889), Grig, king of Scotland, "was the seventy-third king according to the fictitious chronology of Fordoun and Buchanan, but according to Skene's rectified list, the fifth king of the united kingdom of Scone, which Kenneth MacAlpine founded in 844. " [2]

Gregory of Caergwent or Winchester ( fl. 1270), was an English historian who entered the monastery of St. Peter's at Gloucester, according to his own account, on 29 Oct. 1237, and is stated to have lived there for sixty years. [2]

Gregory of Huntingdon (fl. 1290), was an English "monk of Ramsey, of which abbey he is said to have been prior for thirty-eight years, is described as a man of much learning, acquainted with Latin, Greek, and Hebrew. " [2]

Early Origins of the Greygorey family

The surname Greygorey was first found in Leicestershire where "this family is traced to John Gregory, Lord of the manors of Freseley and Asfordby, who married Maud, daughter of Sir Roger Moton, of Peckelton, knight; his son Richard Gregory, of the same places, died in the year 1292. " [3]

Another source confirms this origin in that Willelmus filius Gregorii was listed in Leicestershire 1143-1177. [4]

Later the Assize Rolls for Somerset listed John Grigory there in 1280. John Gregory held land in Sussex, according to the Subsidy Rolls of 1296. [4]

" Derbyshire is the great home of the Gregorys, who, however, are also established in different parts of the country, Northamptonshire ranking next to Derbyshire in this respect, but they are rare or absent in the east of England and in the northernmost counties. In Derbyshire they have been established for many centuries; the Eyam family of Gregory carry their descent back to the times of Edward II. A Warwickshire family of the name begin their pedigree with John Gregory, lord of the manors of Fresely and Asfordby, Leicestershire, in the 13th century; and about that time the name was also to be found in Bedfordshire and Buckinghamshire." [6]

Furthermore in Scotland, the name "may be derived from Gregor, as some of the Clan M'Gregor changed their name to Gregory, when the Clan was proscribed and outlawed." [8]

Early History of the Greygorey family

Greygorey has been spelled many different ways. Before English spelling became standardized over the last few hundred years, spelling variations in names were a common occurrence. As the English language changed in the Middle Ages, absorbing pieces of Latin and French, as well as other languages, the spelling of people's names also changed considerably, even over a single lifetime. Many variations of the name Greygorey have been found, including Gregory, Gregorie, Gregorey and others.

Notables of the family at this time include Charles Gregory, Lord Mayor of London in 1451; Sir William Gregory (1625-1696), a British judge and politician, Speaker of the House of Commons in 1678, he purchased the manor and estate of How Caple, Herefordshire in 1677; Edmund Gregory ( fl. 1646, died 1691), was an English author...
Another 54 words (4 lines of text) are included under the topic Early Greygorey Notables in all our PDF Extended History products and printed products wherever possible.

Migration of the Greygorey family to Ireland

Some of the Greygorey family moved to Ireland, but this topic is not covered in this excerpt.
Another 86 words (6 lines of text) about their life in Ireland is included in all our PDF Extended History products and printed products wherever possible.

Migration of the Greygorey family

In an attempt to escape the chaos experienced in England, many English families boarded overcrowded and diseased ships sailing for the shores of North America and other British colonies. Those families hardy enough, and lucky enough, to make the passage intact were rewarded with land and a social environment less prone to religious and political persecution. Many of these families became important contributors to the young colonies in which they settled. Early immigration and passenger lists have documented some of the first Greygoreys to arrive on North American shores: Alexander, Ben and Thomas Gregorie who settled in Virginia in 1635; Charles Gregory settled in Virginia in 1652; along with Francis, George, James, Joseph, Thomas, all of whom settled at that same time in Virginia.