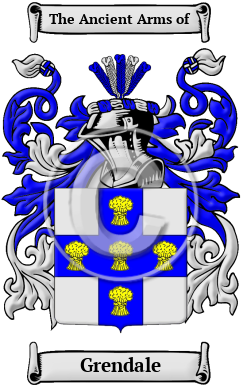 The name Grendale arrived in England after the Norman Conquest of 1066. The Grendale family lived in either Greendale, Devon or Grindale in the East Riding of Yorkshire. [1] Of the last entry, we do know that this parish dates back to the Domesday Book of 1086 when it was first listed as Grendele. [2] Literally the place name means "green valley," [3] or "residence in a green valley." [4]

Turning the clock back a bit further, we found this interesting entry for the family and their origin: "Edmond Grindale, Archbishop of Canterbury, was son of William Grindale, who settled, on the dissolution of the Monasteries, near St. Bees. There were others of the name in London, Hunts, and especially in York, where Grindale or Grendale, afterwards Handale, was situated. This place belonged to a branch of the Percys. Richard de Percy was younger son of William I. de Percy, and brother of Alan de Percy. He obtained from his father Dunsley, Lofthouse (in which Grendale was situated) and other estates. he had, 1. Ralph de Grendale, 2. William de Percy, 3. Walter Fitz-Richard. The second gave lands at Dunsley to Whitby Abbey. Ralph de Grendal was father of Ralph, both living at the foundation of Bridlington Priory. Walter, their younger brother, succeeded, and, 1165, with his uncle William de Percy, held a knight’s fee from William, son of Alan de Percy [6]. From Walter de Grendale descended the Grindales of the North, of whom Walter de Grendale was returned in 1300 as possessing an estate above 40 l. per annum. in York, &c., and was summoned by writ for military service in Scotland, and in 1312 was summoned by writ to the Parliament of York as a Baron of the realm. " [7]

Early Origins of the Grendale family

Early History of the Grendale family

A multitude of spelling variations characterize Norman surnames. Many variations occurred because Old and Middle English lacked any definite spelling rules. The introduction of Norman French to England also had a pronounced effect, as did the court languages of Latin and French. Therefore, one person was often referred to by several different spellings in a single lifetime. The various spellings include Grendall, Grendale, Grendle and others.

Outstanding amongst the family at this time was Edmund Grindall (1519?-1583), Archbishop of Canterbury, "the son of William Grindal, a well-to-do farmer who lived at Hensingham, in the parish of St. Bees, Cumberland, a district which Grindal himself described as 'the ignorantest part in religion, and most oppressed of covetous landlords of anyone part of this realm'. He went at an early age to Cambridge, where he entered first at Magdalene College, and then removed to Christ's College where he was scholar in 1536-7, and afterwards to Pembroke Hall, where he took his B.A. degree in 1538, and in the same...
Another 181 words (13 lines of text) are included under the topic Early Grendale Notables in all our PDF Extended History products and printed products wherever possible.

Migration of the Grendale family

Many English families left England, to avoid the chaos of their homeland and migrated to the many British colonies abroad. Although the conditions on the ships were extremely cramped, and some travelers arrived diseased, starving, and destitute, once in the colonies, many of the families prospered and made valuable contributions to the cultures of what would become the United States and Canada. Research into the origins of individual families in North America has revealed records of the immigration of a number of people bearing the name Grendale or a variant listed above: the name represented in many forms and recorded from the mid 17th century in the great migration from Europe. Migrants settled in the eastern seaboard from Newfoundland, to Maine, to Virginia, the Carolinas, and to the islands..