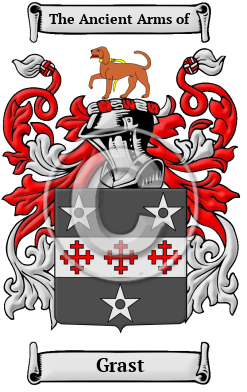 The name Grast is of Anglo-Saxon origin. It was name for a person who because of their physical characteristics was referred to as the gross man or the heavy man. At times, it was a personal name and variant of Grace. [1]

Early Origins of the Grast family

The surname Grast was first found in Cornwall where the first record of the family was found in "Trescobays, or Triscobays, [which] was formerly inherited by the family of Grosse; after which it was purchased by Sir Peter Killigrew, together with the barton of Howard as a parcel of Tregangy." [2]

"During [the reign of Elizabeth] four-fifths [of the manor of Rosmoddris] was granted to St. George Carye, and sold by him to Ezekiel Grosse, Esq. whose family had an ancient seat at Triclodevas in this parish." [2]

"Leah or Leigh, [in the parish of St. Buryan, Cornwall] now occupied by a farmer, was anciently a seat of the Grosse family, and afterwards of the Usticks." [2]

Not withstanding the Cornish origin of the name, some of the family may have originated elsewhere. By example, Willelmus filius grosse was listed in the Domesday Book of 1086 in Suffolk. The same source also lists Willelmus Grossus in Norfolk. [3]

Later in Yorkshire, Geraldus filius Grossi was listed there in the Pipe Rolls of 1176. Adam le Gros was listed at Holme in Norfolk 1186-1210 and Wiliam le Groos was listed in the Feet of Fines for Essex in 1314. [1]

Early History of the Grast family

Spelling variations in names were a common occurrence before English spelling was standardized a few hundred years ago. In the Middle Ages, even the literate spelled their names differently as the English language incorporated elements of French, Latin, and other European languages. Many variations of the name Grast have been found, including Gross, Grosse, Grose and others.

Notables of the family at this time include Alexander Grosse (1596?-1654), English Presbyterian divine, born about 1596, the son of William Grosse, husbandman of Christow, Devonshire. "After attending Exeter school for five years, he was admitted sizar of Gonville and Caius College, Cambridge, on 26 July 1618, and proceeded M.A. (College Admission Register, ed. Venn, p. 138). He became a preacher at...
Another 61 words (4 lines of text) are included under the topic Early Grast Notables in all our PDF Extended History products and printed products wherever possible.

Migration of the Grast family

Families began migrating abroad in enormous numbers because of the political and religious discontent in England. Often faced with persecution and starvation in England, the possibilities of the New World attracted many English people. Although the ocean trips took many lives, those who did get to North America were instrumental in building the necessary groundwork for what would become powerful new nations. Among early immigrants of the Grast surname to cross the Atlantic and come to North America were: Adam Gross who arrived in Philadelphia in 1749; along with Anthony, Christopher, George, Henry, Jacob Gross and many more.