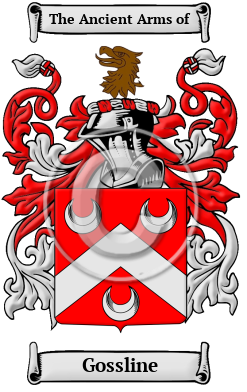 The ancestors of the Gossline family first reached the shores of England in the wave of migration after the Norman Conquest of 1066. Their name is derived from the Germanic given name Gozzelin, which is a diminutive that translates as the little god. The surname Gossline was formed in the vernacular or regional naming tradition, which is the oldest and most pervasive type of patronymic surname. According to this custom, names were originally composed of vocabulary elements from the local language. Vernacular names were widespread throughout Normandy. Accordingly, many typical English and French names are in fact, originally of Germanic origin and often have cognates in other European countries.

Early Origins of the Gossline family

The surname Gossline was first found in Jersey where the earliest on record was Robert Gosselin who was made Governor of the fortress of Mont Orgueil after saving the fort from the French.

Early History of the Gossline family

Norman surnames are characterized by a multitude of spelling variations. The frequent changes in surnames are largely due to the fact that the Old and Middle English languages lacked definite spelling rules. The introduction of Norman French to England, as well as the official court languages of Latin and French, also had pronounced influences on the spelling of surnames. Since medieval scribes and church officials recorded names as they sounded, rather than adhering to any specific spelling rules, it was common to find the same individual referred to with different spellings. The name has been spelled Gosselin, Goselin, Goselyn, Goslin, Gosline, Gosling, Gosslyn, Gossling, Gosselyn and many more.

Outstanding amongst the family at this time was John Joscelyn or Josselin (1529-1603), Latin secretary to Archbishop Parker and Anglo-Saxon scholar, third surviving son of Sir Thomas Josselin of Hyde Hall, Hertfordshire, and High Roding, Essex, a direct descendant from Sir Thomas Jocelyn, who was knighted in 1229, and belonged to an ancient family of Brittany. [3] John Gostlin or Gostlyn MD (c. 1566-1626), was an English academic and physician, Master of Gonville and Caius College, Cambridge from 1619 till his death in 1626 and Regius Professor of Physic. Also a politician, he was Member of Parliament for Barnstaple, Devon (1614-1621.) [3] Ralph...
Another 140 words (10 lines of text) are included under the topic Early Gossline Notables in all our PDF Extended History products and printed products wherever possible.

Migration of the Gossline family to Ireland

Some of the Gossline family moved to Ireland, but this topic is not covered in this excerpt. More information about their life in Ireland is included in all our PDF Extended History products and printed products wherever possible.

Migration of the Gossline family

Many English families emigrated to North American colonies in order to escape the political chaos in Britain at this time. Unfortunately, many English families made the trip to the New World under extremely harsh conditions. Overcrowding on the ships caused the majority of the immigrants to arrive diseased, famished, and destitute from the long journey across the stormy Atlantic. Despite these hardships, many of the families prospered and went on to make invaluable contributions to the development of the cultures of the United States and Canada. Early North American immigration records have revealed a number of people bearing the name Gossline or a variant listed above: William Gosselin settled in Barbados in 1635; Andreas and Barbara Gosselin settled in Charles Town in 1766; Edward Gosselin arrived in New York in 1821..