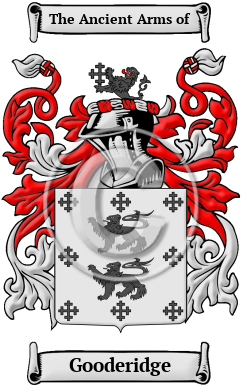 The Anglo-Saxon name Gooderidge comes from the family having resided in the region of Goodrich or Gotheridge in the county of Hereford. The surname Gooderidge may also derive from the patronymic name the son of Godrich which was composed of the elements God which referred to someone good and Ric which meant power. The surname may also have derived from the Old English cud, meaning "famous," with the aforementioned "ric." [1]

Early Origins of the Gooderidge family

The surname Gooderidge was first found in various locations throughout ancient Britain. The Hundredorum Rolls of 1273 list: Walter Goderiche in Bedfordshire; William Godriche in Oxfordshire; Stephen Godrich in Suffolk; and Ambrosius filius Godrige in Cambridgeshire. [4]

Early History of the Gooderidge family

Gooderidge has been spelled many different ways. Before English spelling became standardized over the last few hundred years, spelling variations in names were a common occurrence. As the English language changed in the Middle Ages, absorbing pieces of Latin and French, as well as other languages, the spelling of people's names also changed considerably, even over a single lifetime. Spelling variants included: Goodrich, Gooderidge, Goodrick, Goodricke, Goodridge, Goderich, Godriche, Godric, Godrige, Goderidge, Goodreed, Goodreid, Gutteridge, Guteridge, Guttridge, Gutridge and many more.

Notables of the family at this time include Sir Henry Goodrich of Ribstone Hall, Envoy Extraordinary to the King of Spain in 1682; Francis Goodricke (1621-1673), an English lawyer and politician who sat in the House of Commons between 1659 and 1673; and Rev. Charles Goodrich, the rector of Bittering Parva, county Norfolk. Sir Henry Goodricke (1642-1705), was an English diplomatist, eldest son of Sir John Goodricke (created Baronet by...
Another 69 words (5 lines of text) are included under the topic Early Gooderidge Notables in all our PDF Extended History products and printed products wherever possible.

Migration of the Gooderidge family

In an attempt to escape the chaos experienced in England, many English families boarded overcrowded and diseased ships sailing for the shores of North America and other British colonies. Those families hardy enough, and lucky enough, to make the passage intact were rewarded with land and a social environment less prone to religious and political persecution. Many of these families became important contributors to the young colonies in which they settled. Early immigration and passenger lists have documented some of the first Gooderidges to arrive on North American shores: John Goodrich, who settled in New England in 1630; Thomas Goodrich, who settled in Virginia in 1653; Joe Goodridge, who settled in Virginia in 1635; Henry Gutteridge, who settled in Maryland in 1673.