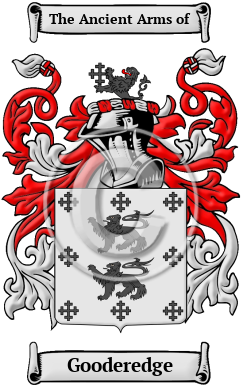 The ancient roots of the Gooderedge family name are in the Anglo-Saxon culture. The name Gooderedge comes from when the family lived in the region of Goodrich or Gotheridge in the county of Hereford. The surname Gooderedge may also derive from the patronymic name the son of Godrich which was composed of the elements God which referred to someone good and Ric which meant power. The surname may also have derived from the Old English cud, meaning "famous," with the aforementioned "ric." [1]

Early Origins of the Gooderedge family

The surname Gooderedge was first found in various locations throughout ancient Britain. The Hundredorum Rolls of 1273 list: Walter Goderiche in Bedfordshire; William Godriche in Oxfordshire; Stephen Godrich in Suffolk; and Ambrosius filius Godrige in Cambridgeshire. [4]

Early History of the Gooderedge family

One relatively recent invention that did much to standardize English spelling was the printing press. However, before its invention even the most literate people recorded their names according to sound rather than spelling. The spelling variations under which the name Gooderedge has appeared include Goodrich, Gooderidge, Goodrick, Goodricke, Goodridge, Goderich, Godriche, Godric, Godrige, Goderidge, Goodreed, Goodreid, Gutteridge, Guteridge, Guttridge, Gutridge and many more.

Notables of the family at this time include Sir Henry Goodrich of Ribstone Hall, Envoy Extraordinary to the King of Spain in 1682; Francis Goodricke (1621-1673), an English lawyer and politician who sat in the House of Commons between 1659 and 1673; and Rev. Charles Goodrich, the rector of Bittering Parva, county Norfolk. Sir Henry Goodricke (1642-1705), was an English diplomatist, eldest son of Sir John Goodricke (created Baronet by...
Another 69 words (5 lines of text) are included under the topic Early Gooderedge Notables in all our PDF Extended History products and printed products wherever possible.

Migration of the Gooderedge family

At this time, the shores of the New World beckoned many English families that felt that the social climate in England was oppressive and lacked opportunity for change. Thousands left England at great expense in ships that were overcrowded and full of disease. A great portion of these settlers never survived the journey and even a greater number arrived sick, starving, and without a penny. The survivors, however, were often greeted with greater opportunity than they could have experienced back home. These English settlers made significant contributions to those colonies that would eventually become the United States and Canada. An examination of early immigration records and passenger ship lists revealed that people bearing the name Gooderedge arrived in North America very early: John Goodrich, who settled in New England in 1630; Thomas Goodrich, who settled in Virginia in 1653; Joe Goodridge, who settled in Virginia in 1635; Henry Gutteridge, who settled in Maryland in 1673.