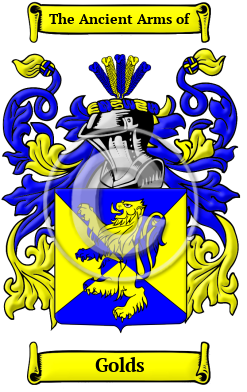 The generations and branches of the Golds family share a name that has its roots in the ancient Anglo-Saxon culture of Britain. The name Golds comes from the Old English word Gold. This term was often used as an endearment or show of affection. [1]

"This surname is derived from the name of an ancestor. 'the son of Gold.' from the Anglo-Saxon word gold, metaphorically precious." [2]

Another source notes the name denotes a "descendant of Gold or Golda, Old English personal names derived from the metal." [3]

Early Origins of the Golds family

The Hundredorum Rolls has the name listed as a forename and a surname: Adam Gold; Golda Imayn; and Golda Bassat, Cambridgeshire. [2]

In Scotland, more often than not, the name is spelt Guild and variants of the same. It is generally thought that Goold (Gold) is a variant. [5] [3]

Here, the first record was of Alexander Gulde who rendered to Exchequer the accounts of the bailies of Stirling, 1421 and 1425. Thomas Gulde and William Gulid, 'husbandis,' were charter witnesses, 1481, and Henry Guld is mentioned in a Scone document of 1491. [5]

Early History of the Golds family

Until quite recently, the English language has lacked a definite system of spelling rules. Consequently, Anglo-Saxon surnames are characterized by a multitude of spelling variations. Changes in Anglo-Saxon names were influenced by the evolution of the English language, as it incorporated elements of French, Latin, and other languages. Although Medieval scribes and church officials recorded names as they sounded, so it is common to find one person referred to by several different spellings of his surname, even the most literate people varied the spelling of their own names. Variations of the name Golds include Gould, Goold, Gold, Gilder and others.

Notables of the family at this time include James Gould (1593-1676), an English politician who sat in the House of Commons between 1659 and 1676; and Thomas Gould (ca. 1619-1675), the first pastor of the First Baptist Church of Boston in Boston, Massachusetts. Sir Henry Gould the Elder (1644-1710), was an English judge, son and heir of Andrew Gould of Winsham, Somersetshire. Sir Henry Gould the Younger (1710-1794), was an English judge, the fourth son of Davidge Gould of Sharpham...
Another 78 words (6 lines of text) are included under the topic Early Golds Notables in all our PDF Extended History products and printed products wherever possible.

Migration of the Golds family to Ireland

Some of the Golds family moved to Ireland, but this topic is not covered in this excerpt.
Another 116 words (8 lines of text) about their life in Ireland is included in all our PDF Extended History products and printed products wherever possible.

Golds Settlers in Australia in the 19th Century