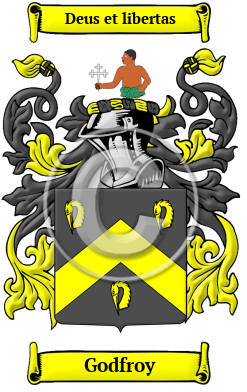 The Godfroy surname finds its earliest origins with the ancient Anglo-Saxon culture of Britain. Their name is derived from the baptismal name for the son of Godfrey. Baptismal names were a form of patronymic surnames, and came from either the religious or vernacular given name traditions. In this case, the patronym was adopted from the personal name of the bearers father.

Early Origins of the Godfroy family

The surname Godfroy was first found in Kent. One of the first records of the name was Henricus filius Godefrid who was listed in the Pipe Rolls taken during the reign of King Henry II (1154-1189.) [1]

Early History of the Godfroy family

It is only in the last few hundred years that the English language has been standardized. For that reason, early Anglo-Saxon surnames like Godfroy are characterized by many spelling variations. As the English language changed and incorporated elements of other European languages, even literate people changed the spelling of their names. The variations of the name Godfroy include: Godfrey, Godfry, Godfrie, Godfree, Godfery, Godkin and many more.

Notables of this surname at this time include: Sir Edmund Berry Godfrey (1622-1678), English politician, London woodmonger and Justice of the Peace, his unsolved murder was one of the most celebrated historical mysteries; Richard Godfrey...
Another 35 words (2 lines of text) are included under the topic Early Godfroy Notables in all our PDF Extended History products and printed products wherever possible.

Migration of the Godfroy family to Ireland

Some of the Godfroy family moved to Ireland, but this topic is not covered in this excerpt.
Another 120 words (9 lines of text) about their life in Ireland is included in all our PDF Extended History products and printed products wherever possible.

Migration of the Godfroy family