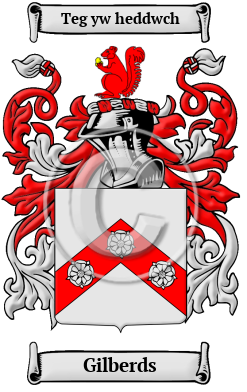 While surnames were well-known during the English medieval period, Cornish People originally used only a single name. The way in which hereditary surnames came into common use is interesting. Under the Feudal System of government, surnames evolved and they often reflected life on the manor and in the field. Patronymic surnames were derived from given names and were the predominant type of surname among the Celtic peoples of Britain. However, the people of Cornwall provide a surprising exception to this rule, and patronymic surnames are less common among them than other people of Celtic stock, such as their Welsh neighbors. This type of surname blended perfectly with the prevailing Feudal System. One feature that is occasionally found in Cornish surnames of this type is the suffix -oe or -ow; this is derived from the Cornish plural suffix -ow. is a patronymic surname that came from the ancient Germanic personal name Gisilbert, meaning bright pledge.

Early Origins of the Gilberds family

The surname Gilberds was first found in Devon where they were well established shortly after the Conquest with Gilbert of Sempringham (c. 1083-1190,) son of a wealthy Norman knight, a theologian, who became the first Englishman to found a convent; he was canonized in 1202. He was founder of the order that bears his name.

"Near Dartmouth is Greenway, the seat of the famous Gilberts. The family was settled here in the reign of Edward II. ; and here were born their father being Otho Gilbert and their mother Katherine Champernowne Humphry and Adrian Gilbert, the famous half-brothers of the still more famous Sir Walter Ralegh." [1]

Gilbert the Universal (d. 1134?), was Bishop of London, "is described as 'natione Britannus' by Richard of Poitiers, who probably means a Breton rather than a Welshman." [2]

Gilbert of Louth (d. 1153?), Abbot of Basingwerk, was sent by Gervase, founder and first abbot of Louth in Lincolnshire, about 1140 to an Irish king " in order to obtain a grant to build a monastery in Ireland. The grant was made, and on Gilbert complaining that he did not understand the language, the king gave him as an interpreter the knight Owen, who, according to the legend, had descended into purgatory." [2]

"The Gilbertines were an English order with numerous convents at the time of the suppression." [3]

Early History of the Gilberds family

This web page shows only a small excerpt of our Gilberds research. Another 76 words (5 lines of text) covering the years 1537, 1583, 1544, 1603, 1613, 1694 and are included under the topic Early Gilberds History in all our PDF Extended History products and printed products wherever possible.

Cornish surnames are characterized by a multitude of spelling variations. The frequent changes in surnames are due to the fact that the Old and Middle English languages lacked definite spelling rules. The official court languages, which were Latin and French, were also influential on the spelling of a surname. Since the spelling of surnames was rarely consistent in medieval times, and scribes and church officials recorded names as they sounded rather than adhering to any specific spelling rules, it was common to find the same individual referred to with different spellings of their surname in the ancient chronicles. Moreover, a large number of foreign names were brought into England, which accelerated and accentuated the alterations to the spelling of various surnames. Lastly, spelling variations often resulted from the linguistic differences between the people of Cornwall and the rest of England. The Cornish spoke a unique Brythonic Celtic language which was first recorded in written documents during the 10th century. However, they became increasingly Anglicized, and Cornish became extinct as a spoken language in 1777, although it has been revived by Cornish patriots in the modern era. The name has been spelled Gilbert, Gilbart and others.

Notable amongst the family at this time was Sir Robert Gilbert of Somerson; Sir Humphrey Gilbert (c.1537-1583), English soldier and politician, known as the first English colonizer, even though his...
Another 30 words (2 lines of text) are included under the topic Early Gilberds Notables in all our PDF Extended History products and printed products wherever possible.

Migration of the Gilberds family to Ireland

Some of the Gilberds family moved to Ireland, but this topic is not covered in this excerpt.
Another 57 words (4 lines of text) about their life in Ireland is included in all our PDF Extended History products and printed products wherever possible.

Migration of the Gilberds family