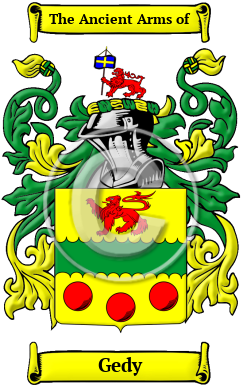 Gedy is a name of ancient Anglo-Saxon origin and comes from the family once having lived the ancient Hebrew name Gideon, meaning one who cuts down.

Early Origins of the Gedy family

The surname Gedy was first found in Hampshire where Herbert Gidi was the first on record at Winton in 1115. Further north, Walter le Gidye was listed in the Assize Rolls for Yorkshire in 1219 and later Roger Geddy was listed in the Pipe Rolls there in 1230. [1]

In Scotland, John Gedy ( fl. 1370), was Abbot of Arbroath. He was " 'the worthy abbot of Aberbrothock' of Southey's 'Inchcape Bell,' and was in office in 1370 when he entered into an engagement regarding the judge or doomster of the regality. His seal is appended to the act of parliament which regulated the succession to the crown in 1371. " [4]

Early History of the Gedy family

Sound was what guided spelling in the essentially pre-literate Middle Ages, so one person's name was often recorded under several variations during a single lifetime. Also, before the advent of the printing press and the first dictionaries, the English language was not standardized. Therefore, spelling variations were common, even among the names of the most literate people. Known variations of the Gedy family name include Giddy, Giddie, Gideon, Gedy, Geddy, Geddey and others.

Distinguished members of the family include Sir Charles Gideon; and Sampson Gideon (1699-1762), a Jewish-British banker in London, he was a trusted "adviser of the Government," and a supporter of the Jew Bill of 1753. " His father, Rowland Gideon (d. 1720), a West India merchant, who was a freeman of the city of London and on the court of the Painter Stainers' Company (admitted 17 Feb. 1697), had changed his name from the Portuguese...
Another 74 words (5 lines of text) are included under the topic Early Gedy Notables in all our PDF Extended History products and printed products wherever possible.

Migration of the Gedy family

For political, religious, and economic reasons, thousands of English families boarded ships for Ireland, Canada, the America colonies, and many of smaller tropical colonies in the hope of finding better lives abroad. Although the passage on the cramped, dank ships caused many to arrive in the New World diseased and starving, those families that survived the trip often went on to make valuable contributions to those new societies to which they arrived. Early immigrants bearing the Gedy surname or a spelling variation of the name include: James Giddie who settled in New England in 1805.