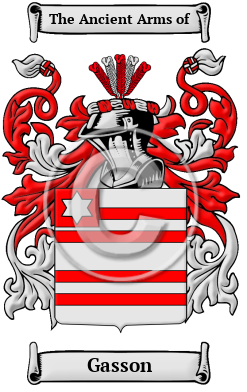 Early Origins of the Gasson family

The surname Gasson was first found in Cornwall where they held a family seat. The name, taking many forms, predominated in Cornwall before the Conquest, dating back to 1000 A,D, as Wasso, Wasce, Wazo, Gazo, Gasche, (all pronounced approximately the same) and in the next two centuries they proliferated along the south coast of England into Somerset, Hampshire, Essex, Cambridge and as far north as Lincolnshire.

Wace (fl. 1170), the famous chronicler, was born in Jersey, probably about 1100. His parents' names are unknown; his mother was a daughter of Toustein, Chamberlain to Robert I, Duke of Normandy. He is best known for his poem 'Roman de Rou,' a work, as reconstituted by modern French criticism. [1]

At the time of the taking of the Domesday Book in 1086, a census taken by Duke William of all his taxable estates, the name was represented by Robertus filius Wazonis, a Latin version of the surname. The spelling of Gace is pronounced Wace, just as Guilliam is William.

Early History of the Gasson family

Cornish surnames are characterized by a multitude of spelling variations. The frequent changes in surnames are due to the fact that the Old and Middle English languages lacked definite spelling rules. The official court languages, which were Latin and French, were also influential on the spelling of a surname. Since the spelling of surnames was rarely consistent in medieval times, and scribes and church officials recorded names as they sounded rather than adhering to any specific spelling rules, it was common to find the same individual referred to with different spellings of their surname in the ancient chronicles. Moreover, a large number of foreign names were brought into England, which accelerated and accentuated the alterations to the spelling of various surnames. Lastly, spelling variations often resulted from the linguistic differences between the people of Cornwall and the rest of England. The Cornish spoke a unique Brythonic Celtic language which was first recorded in written documents during the 10th century. However, they became increasingly Anglicized, and Cornish became extinct as a spoken language in 1777, although it has been revived by Cornish patriots in the modern era. The name has been spelled Wace, Waison, Wayson, Wasson, Wash, Waze, Waize, Waice, Gaish, Gash, Gason, Gasson, Gaze, Ways, Wasso, Waso, Gace, Gaco, Wass and many more.

Notable amongst the family at this time was Christopher Wase (1627-1690), an English scholar, author, translator, and educator, Architypographus of Oxford University Press. William Wasey (1691-1757), was an English physician, the son of William Wasey, an attorney, who resided at Brunstead in Norfolk. He...
Another 43 words (3 lines of text) are included under the topic Early Gasson Notables in all our PDF Extended History products and printed products wherever possible.

Migration of the Gasson family to Ireland

Some of the Gasson family moved to Ireland, but this topic is not covered in this excerpt.
Another 51 words (4 lines of text) about their life in Ireland is included in all our PDF Extended History products and printed products wherever possible.

Gasson migration to the United States +

Gasson Settlers in United States in the 18th Century

Gasson Settlers in Australia in the 19th Century

Gasson Settlers in New Zealand in the 19th Century

Gasson Settlers in West Indies in the 17th Century