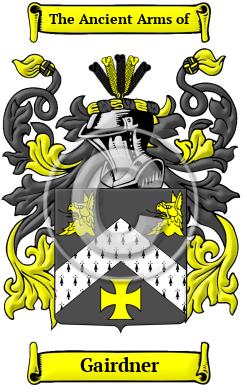 The name Gairdner comes from one of the family having worked as a gardener. The surname Gairdner originally derived from the Old French word gardinier. [1]

It was later adopted in England after the Norman Conquest of 1066. Occupational names that were derived from the common trades of the medieval era transcended European cultural and linguistic boundaries. Occupational names have remained fairly common in the modern period. This is attested to by the continuing appearance of occupational suffixes at the end of many English surnames. Some of these suffixes include: herd, monger, maker, hewer, smith, and wright. Similarly, surnames of office, which include military, judicial, papal and other positions of authority, are widespread throughout Europe. Those who were involved in the military, or feudal armies, were given names such as the English surname Archer, the French name Chevalier and the German name Jeger, which means hunter. Names that were derived from judicial and papal titles, such asBailiffe, Squire and Abbott, are still commonly seen with the same surname spelling today.

Early Origins of the Gairdner family

The name is "most characteristic of the midland counties, and of the eastern counties south of the Wash. Singularly rare in the south - west, and in the north of England, excepting Lancashire. At present best represented in Essex, Lancashire, and Warwickshire." [3]

The Yorkshire Poll Tax Rolls of 1379 had only two entries:Thomas Gardiner; and Thomas Garchiner as holding lands there at that time.

In Scotland, the name was rendered in Latin charters as ortolanus and under that spelling the first Scottish record was found: Rogerus Ortolanus, who was juror on an inquest in 1296. "In 1329 there is record of meal delivered to Nicholas Gerdener who is again referred to as Nicholas ortolanus. Gilbert ortolanus is also referred to in the same source. Robert Gardnar was a notary public in the diocese of Dunblane in 1426." [5]

Early History of the Gairdner family

Spelling variations in names were a common occurrence before English spelling was standardized a few hundred years ago. In the Middle Ages, even the literate spelled their names differently as the English language incorporated elements of French, Latin, and other European languages. Many variations of the name Gairdner have been found, including: Gardiner, Gardner and others.

Outstanding amongst the family at this time was Stephen Gardiner (c.1493-1555), English prelate, who was made Bishop of Winchester (1531); Richard Gardyner, Lord Mayor of London in 1478; Thomas Gardiner (1591-1662), an English lawyer and politician who sat in the House of Commons in 1640, supporter of the Royalist cause in the English Civil War; Thomas Gardner (c. 1592-1674), English settler to Massachusetts, Overseer of...
Another 64 words (5 lines of text) are included under the topic Early Gairdner Notables in all our PDF Extended History products and printed products wherever possible.

Migration of the Gairdner family to Ireland

Some of the Gairdner family moved to Ireland, but this topic is not covered in this excerpt.
Another 100 words (7 lines of text) about their life in Ireland is included in all our PDF Extended History products and printed products wherever possible.

Gairdner migration to the United States +

Families began migrating abroad in enormous numbers because of the political and religious discontent in England. Often faced with persecution and starvation in England, the possibilities of the New World attracted many English people. Although the ocean trips took many lives, those who did get to North America were instrumental in building the necessary groundwork for what would become for new powerful nations. Among the first immigrants of the name Gairdner, or a variant listed above to cross the Atlantic and come to North America were :

Gairdner Settlers in United States in the 18th Century

Gairdner Settlers in United States in the 19th Century