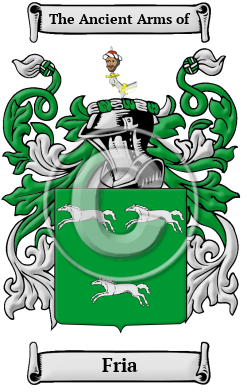 Fria is a name of Anglo-Saxon origin. It was a name given to a person who was referred to as the fry, which literally means free. It has also been suggested that Fria comes from the Middle English word fry, meaning "small person," or "child." In either instance, the origins of the name are as a nickname which referred to characteristics of the first person who used the name. [1] [2]

Early Origins of the Fria family

The surname Fria was first found in Wiltshire where the Hundredorum Rolls of 1273 has two listings: Thomas le Frye; and Geoffrey le Frye as both holding lands there at that time.

In Cornwall, the Cornish version of the name denotes "a hill, a town or house on the most prominent part of a hill or eminence." [4]

"Of the old Wiltshire families of yeomen, few can boast a greater antiquity, and few have shown more love of their county by remaining in it, than those bearing the name of Fry. Numerous as they now are, especially around Chippenham, we find that as far back as in the reigns of Henry III. and Edward I., the Fryes or Fries found in Wiltshire their main abode. The Frys of Ashgrove, in the parish of Donhead St. Mary, appear to be one of the parent stocks; they gave the burial ground for Quakers in that parish, which has been used for this purpose ever since the Society of Friends was first established in England." [5]

The famed English prison reformer Elizabeth Fry, (1780-1845) born Elizabeth Gurney, hailed from Norfolk into a prominent Quaker family. After her first visit to Newgate Prison in 1813, she was horrified and vowed to make changes. One of her admirers, Queen Victoria granted her an audience that led to the Gaols Act of 1823. England still regards her with so much importance that her likeness appeared on the £5 note from 2001 to 2016.

Early History of the Fria family

Before the last few hundred years, the English language had no fast system of spelling rules. For that reason, spelling variations are commonly found in early Anglo-Saxon surnames. Over the years, many variations of the name Fria were recorded, including Fry, Frye, Free and others.

Notables of the family at this time include Sir John Fray (died 1461), an English lawyer who served as Baron of the Exchequer from 1426 and Lord Chief Baron of the Exchequer in 1448; Walter Frye (c. died 1474), an English composer of the early Renaissance; John Fry (1609-1657), Member of the English Parliament and sat as...
Another 57 words (4 lines of text) are included under the topic Early Fria Notables in all our PDF Extended History products and printed products wherever possible.

Migration of the Fria family to Ireland

Some of the Fria family moved to Ireland, but this topic is not covered in this excerpt. More information about their life in Ireland is included in all our PDF Extended History products and printed products wherever possible.

Fria migration to the United States +

To escape oppression and starvation at that time, many English families left for the "open frontiers" of the New World with all its perceived opportunities. In droves people migrated to the many British colonies, those in North America in particular, paying high rates for passages in cramped, unsafe ships. Although many of the settlers did not make the long passage alive, those who did see the shores of North America perceived great opportunities before them. Many of the families that came from England went on to make essential contributions to the emerging nations of Canada and the United States. Research into various historical records revealed some of first members of the Fria family emigrate to North America:

Fria Settlers in United States in the 18th Century

Fria Settlers in United States in the 19th Century

Fria Settlers in West Indies in the 17th Century