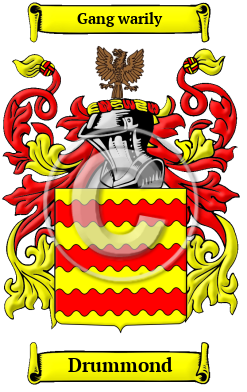 The Scottish Drummond surname comes from the Gaelic word "drumainn," which means "a ridge," and is a habitational name derived from the name of any of the several various places so named; and Annabella Drummond (c. 1350–1401), Queen Consort of Scotland as the wife of Robert III of Scotland.

Early Origins of the Drummond family

The surname Drummond was first found in Perthshire (Gaelic: Siorrachd Pheairt) former county in the present day Council Area of Perth and Kinross, located in central Scotland. There is also an early reference to the Clan in the district of Lennox when Gilbert de Drummyn, who was chaplain to Alwyn, Earl of Levenax, was witness to a charter by that Earl around 1199. [1]

Early History of the Drummond family

Notable among the family at this time was Margaret Drummond (c. 1475-1501), mistress of King James IV of Scotland, she died from food poisoning in 1501, she was a daughter of John Drummond, 1st Lord Drummond (died 1519), who was a Scottish statesman. William Drummond (1585-1649), was a Scottish poet; Patrick Drummond, 3rd Lord Drummond; Lady Lilias Drummond (c. 1621-1663); Sir John Drummond (1620-1678), Scottish...
Another 64 words (5 lines of text) are included under the topic Early Drummond Notables in all our PDF Extended History products and printed products wherever possible.

Migration of the Drummond family to Ireland

Some of the Drummond family moved to Ireland, but this topic is not covered in this excerpt.
Another 57 words (4 lines of text) about their life in Ireland is included in all our PDF Extended History products and printed products wherever possible.

Drummond migration to the United States +

Drummond Settlers in United States in the 17th Century

Drummond Settlers in United States in the 18th Century

Drummond Settlers in United States in the 19th Century

Drummond Settlers in Canada in the 18th Century

Drummond Settlers in Canada in the 19th Century

Drummond Settlers in Australia in the 19th Century

Drummond Settlers in New Zealand in the 19th Century

Suggested Readings for the name Drummond +