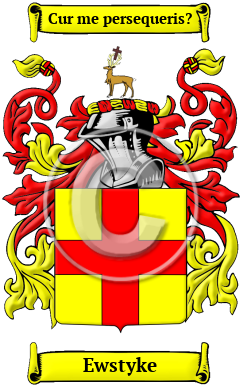 When the Anglo-Normans began to settle in Ireland, they initially ignored the established Gaelic system for developing of patronymic names, and relied on their own traditional naming practices. Eventually, however, the two differing customs drew upon one another to some degree. The Anglo-Normans, unlike their Gaelic neighbors, frequently used nickname surnames. These Anglo-Norman nicknames were frequently of two types: "oath names" and "imperative names." Oath names often carried blessings or were formed from habitual expressions. Imperative names, formed from a verb added to a noun or an adverb, metaphorically described the bearer's occupations. The nick name surname Ewstyke is derived from a nickname for a Iustas, indicating a fruitful person. This perhaps refers to someone with many offspring, or with extraordinary agricultural or material wealth. The Latin form Eustachius was originally derived from a Greek word which means fruitful.

Early Origins of the Ewstyke family

The surname Ewstyke was first found in Kildare (Irish:Cill Dara), ancient homeland of the Kildare based Uí Dúnlainge (Kings of Leinster), located in the Province of Leinster, where they held a family seat from ancient times.

Early History of the Ewstyke family

Migration of the Ewstyke family