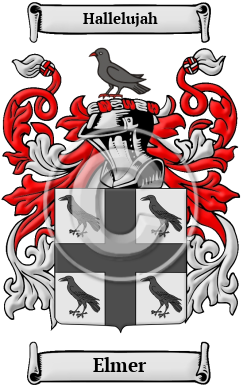 The Strongbownian invaders added their Norman conventions for surnames to the previously established Irish system for hereditary surnames. One of the most frequent forms of surnames for both cultures was the patronymic surname, which was formed from the name of the bearer's father or grandfather. The Norman tradition that the followers of Strongbow brought with them created such a surname through diminutive suffixes such as -ot, -et, -un, -in, or -el. Occasionally, two suffixes were combined to form a double diminutive, as in the combinations of -el-in, -el-ot, -in-ot, and -et-in. The Normans also formed patronymic surnames in a manner very similar to the Irish: they added a prefix to their father's name. These Anglo-Norman people, however, used the prefix Fitz-, which was derived from the French word fils, and ultimately from the Latin filius, which both mean son. Although this prefix probably originated in Flanders or Normandy, it can now only be found in Ireland. The surname Elmer is derived from the Anglo-Saxon personal name Ædelmær, which literally means "noble, famous." The Gaelic form of the surname Elmer is Aighlmear.

Early Origins of the Elmer family

The surname Elmer was first found in Essex, where they were tenants in chief and Lords of the manor of Aylmer.

"This family trace their name and descent from Ailmer or Athelmare, Earl of Cornwall, in the time of King Ethelred. Allmor, in Welsh, signifies a valley or dale." [1]

"This Anglo-Saxon name came to Ireland after the Norman invasion and, settling in Leinster, families so called became hibernicized." [2]

Early History of the Elmer family

This web page shows only a small excerpt of our Elmer research. Another 82 words (6 lines of text) covering the years 1172, 1650, 1720 and 1678 are included under the topic Early Elmer History in all our PDF Extended History products and printed products wherever possible.

It was found during an investigation of the origins of the name Elmer that church officials and medieval scribes often spelled the name as it sounded. This practice lead to a single person's being documented under many spelling variations. The name Elmer has existed in the various shapes: Ailmer, Aylmer, Elmer, Elmore, Ellmore, Ellmer and others.

Notable amongst the family up to this time was Matthew Aylmer (c.1650-1720), Lord Aylmer, Admiral and Commander-in-Chief, the second son of Sir Christopher Aylmer of Balrath, County Meath. "He entered the navy under the protection of the Duke of Buckingham, as...
Another 41 words (3 lines of text) are included under the topic Early Elmer Notables in all our PDF Extended History products and printed products wherever possible.

In the United States, the name Elmer is the 5,625th most popular surname with an estimated 4,974 people with that name. [3]

Elmer migration to the United States +

In the 1840s, Ireland experienced a mass exodus to North America due to the Great Potato Famine. These families wanted to escape from hunger and disease that was ravaging their homeland. With the promise of work, freedom and land overseas, the Irish looked upon British North America and the United States as a means of hope and prosperity. Those that survived the journey were able to achieve this through much hard work and perseverance. Early immigration and passenger lists revealed many bearing the name Elmer:

Elmer Settlers in United States in the 17th Century

Elmer Settlers in United States in the 19th Century

Elmer Settlers in Australia in the 19th Century