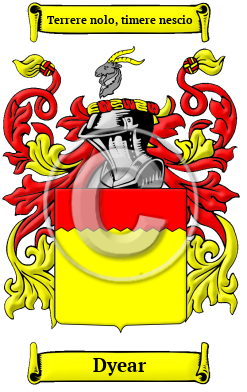 Dyear is a name of Anglo-Saxon origin. It was a name given to a deer, where in early times it was used as a term of endearment. The surname Dyear originally derived from the Old English Dyri. The name could also have been derived from the Old English word deag, which meant "dye." As a surname, Dyear was likely an occupational name for a "dyer of cloth." [1] In ancient Latin documents, the trade and surname was listed as "tinctor" and has a French equivalent of Teinturier.

Early Origins of the Dyear family

The surname Dyear was first found in Oxfordshire where one the first records of the family was John le Deyere who was listed in the Hundredorum Rolls of 1273. There was quite a few early records of the family in Somerset. Kirby's Quest of Somerset listed: John Dyar; Richard le Dyghar; John le Dyghar, as all having lived there temp. 1 Edward III. Richard le Dyer, of Kiderminster was rector of Fincham, Norfolk in 1333. [2] [3]

Early History of the Dyear family

Before the last few hundred years, the English language had no fast system of spelling rules. For that reason, spelling variations are commonly found in early Anglo-Saxon surnames. Over the years, many variations of the name Dyear were recorded, including Dyer, Dyers, Dyar, Dier, Dyars, Dieres, Dire, Dires and many more.

Notables of this surname at this time include: Sir Edward Dyer (1543-1607) English poet in the court of Elizabethan I, he was knighted and made chancellor of the Order of the Garter in 1596; William Dyre (died 1685), Englishman who served as the 13th Mayor of New York City (1680 to 1682); John Dyer (1699-1757), a Welsh poet; and Mary Barrett Dyer (c.1611-1660), an English Puritan turned Quaker who was hanged in Boston, Massachusetts for repeatedly defying a law banning Quakers from...
Another 81 words (6 lines of text) are included under the topic Early Dyear Notables in all our PDF Extended History products and printed products wherever possible.

Migration of the Dyear family to Ireland

Some of the Dyear family moved to Ireland, but this topic is not covered in this excerpt. More information about their life in Ireland is included in all our PDF Extended History products and printed products wherever possible.

Migration of the Dyear family

To escape oppression and starvation at that time, many English families left for the "open frontiers" of the New World with all its perceived opportunities. In droves people migrated to the many British colonies, those in North America in particular, paying high rates for passages in cramped, unsafe ships. Although many of the settlers did not make the long passage alive, those who did see the shores of North America perceived great opportunities before them. Many of the families that came from England went on to make essential contributions to the emerging nations of Canada and the United States. Research into various historical records revealed some of first members of the Dyear family emigrate to North America: Abigail Dyer who settled in Nantasket, Massachusetts in 1630.