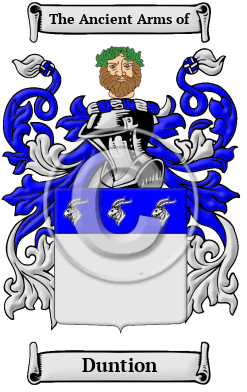 The Anglo-Saxon name Duntion comes from when the family resided in Dunton of which there are five parishes in England. Parishes can be found in Bedfordshire, Buckinghamshire, Norfolk, Leicestershire and Essex. The last is of particular importance. Now known as Dunton-Waylett, it dates back to the Domesday Book of 1086. "At the time of the Norman survey, the manor of Dunton Hall belonged to Odo, Bishop of Bayeaux, by whom it was bestowed on the abbey of Bec, in Normandy; and on the suppression of alien priories it was granted to King's College, Cambridge."

The Waylett suffix like the suffix for Dunton-Basset (Leicestershire) were added later to denote the family who held their family seat there. Actually there are more entries in the Domesday Book that should be mentioned now: Dodintone, Buckinghamshire; Donitone, Bedfordshire; Dontuna, Norfolk; and Donitone, Leicestershire. All of these place names evolved to be known as Dunton. [1]

The manor of Dunton, with Doughton was " given by Henry VII. to Ralph de Hauville, to be held by service of keeping the king's falcons; it passed in the reign of Elizabeth to Lord Chief Justice Coke." [2]

Early Origins of the Duntion family

Early History of the Duntion family

This web page shows only a small excerpt of our Duntion research. Another 77 words (6 lines of text) covering the years 1280, 1400, 1593, 1659, 1733 and 1660 are included under the topic Early Duntion History in all our PDF Extended History products and printed products wherever possible.

The English language only became standardized in the last few centuries; therefore,spelling variations are common among early Anglo-Saxon names. As the form of the English language changed, even the spelling of literate people's names evolved. Duntion has been recorded under many different variations, including Dunton, Duntin and others.

Distinguished members of the family include John Dunton (1659-1733), and English writer, publisher and bookseller; he produced a periodical called the Athenian Gazette. "His father, grandfather, and great-grandfather were all named John Dunton, and had all been clergymen. His father had been fellow of Trinity College, Cambridge, and...
Another 48 words (3 lines of text) are included under the topic Early Duntion Notables in all our PDF Extended History products and printed products wherever possible.

Migration of the Duntion family

For many English families, the political and religious disarray that shrouded England made the far away New World an attractive prospect. On cramped disease-ridden ships, thousands migrated to those British colonies that would eventually become Canada and the United States. Those hardy settlers that survived the journey often went on to make important contributions to the emerging nations in which they landed. Analysis of immigration records indicates that some of the first North American immigrants bore the name Duntion or a variant listed above: Andrew Dunton, who settled in Virginia in 1634; Thomas settled in Virginia in 1647; Robert settled in Pennsylvania in 1682; Robert Dunton arrived in Boston Massachusetts in 1822..