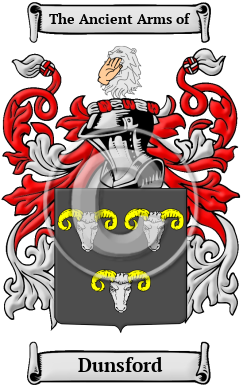 The Anglo-Saxon name Dunsford comes from when the family resided in the town of Dunford in the northern county of Yorkshire. This West Riding town was first inhabited by the Dunford name in the early 1200's. One of the first records of the name was William de Dunneford who was listed in the Feet of Fines in 1332. A few years later William Dinford was listed in the Subsidy Rolls of 1332.

Early Origins of the Dunsford family

The surname Dunsford was first found in Yorkshire where they held a family seat from early times.

Early History of the Dunsford family

This web page shows only a small excerpt of our Dunsford research. Another 96 words (7 lines of text) covering the years 1273 and 1379 are included under the topic Early Dunsford History in all our PDF Extended History products and printed products wherever possible.

The English language only became standardized in the last few centuries; therefore,spelling variations are common among early Anglo-Saxon names. As the form of the English language changed, even the spelling of literate people's names evolved. Dunsford has been recorded under many different variations, including Dunsford, Downford, Dounsford, Duinsford, Duneford and many more.

More information is included under the topic Early Dunsford Notables in all our PDF Extended History products and printed products wherever possible.

Migration of the Dunsford family to Ireland

Some of the Dunsford family moved to Ireland, but this topic is not covered in this excerpt. More information about their life in Ireland is included in all our PDF Extended History products and printed products wherever possible.

Dunsford Settlers in Australia in the 19th Century

Dunsford Settlers in New Zealand in the 19th Century