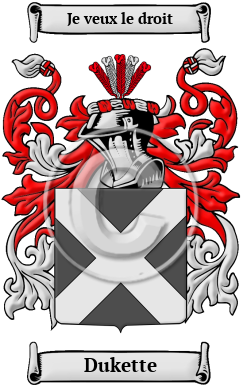 Early Origins of the Dukette family

The surname Dukette was first found in Lincolnshire where Richard Duket was listed Henry III-Edward I in the Testa de Nevill, sive Liber Feodorum, temp. Henry III-Edward I. [1] The Hundredorum Rolls of 1273 listed Dulcia Duket with no county. Later the Yorkshire Poll Tax Rolls of 1379 listed Adam Doket; Johannes Doket; and Willelmus Dokettii. [2]

Early History of the Dukette family

Outstanding amongst the family at this time was Andrew Doket or Ducket (d. 1484), first president of Queens' College, Cambridge, generally thought to have been principal of St. Bernard's Hostel, of which he may probably have been the founder, and certainly was the owner. [5] Sir John Ducket, and Ducket, was Lord Mayor of London 1572; John Duckett (1580-1648), of Hartham House, Corsham, Wiltshire, was an English landowner and politician, Member of Parliament for Calne, Wiltshire (1621-1624), High Sheriff of Wiltshire (1682); and his son, William Duckett (1624-1686), was an English politician, Member of Parliament for Calne, Wiltshire (1659-1679.) James Duckett (d. 1601)...
Another 102 words (7 lines of text) are included under the topic Early Dukette Notables in all our PDF Extended History products and printed products wherever possible.

Migration of the Dukette family to Ireland

Some of the Dukette family moved to Ireland, but this topic is not covered in this excerpt. More information about their life in Ireland is included in all our PDF Extended History products and printed products wherever possible.

Migration of the Dukette family