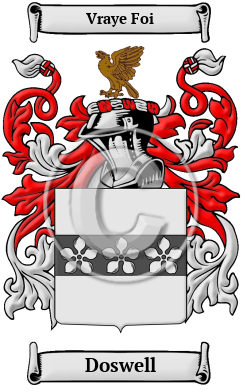 The prestigious surname Doswell came to Britain with the Norman invasion of 1066. It is thought that the surname originated in Beauzeville, France, and that Elias de Boesevilla of this region was the first Norman settler to Britain. Many of these Norman families moved north, into Scotland in the period following the Norman Conquest of England. [1]

Early Origins of the Doswell family

The surname Doswell was first found in Yorkshire, where Sir Ralph Boswell of Guntwaite, a descendant of Elias de Boesevilla, the first settler from Normandy, held lands. In the 12th century Sir Ralph lost his Yorkshire estates to the Earls of Warenne. "The family were in England in 1136, and probably from the period of the Conquest." [2]

The Hundredorum Rolls of 1273 included: John de Bosevil, Yorkshire; and Henry de Bosevil, Northamptonshire while the Yorkshire Poll Tax Rolls of 1379 included Agnes Bosseuill as holding lands there at that time. [3]

The family moved north to Scotland at the invitation of David, Earl of Huntingdon, where they settled in Berwickshire at Edenham. "The first of the name in Scotland was Robert de Boseuille, who witnessed several charters in the earlier part of the reign of William the Lion, and is said to have held land in Berwickshire. He was witness to a charter by Walter de Berkeley to the Abbey of Aberbrothoc c. 1170 and to the king's confirmation of same. Between 1178-80 he witnessed gift by William the Lion of a salina in Kars to the same abbey, and last appears c. 1204 when he witnessed grant of a toft in Forfar. Paganus de Bosseuilla before 1200 gave a bovate of land in Ede nlum to the Abbey of Kelso. Henry de Boysuill witnessed a charter by John, earl of Huntingdon to Norman, son of Malcolm c. 1225. Walter de Boseville was taken prisoner at Dunbar, 1296, and William de Boseville of Berwickshire and William de Boseville of Roxburghshire rendered homage, in same year. Noteworthy, too, is the fact that the names are alike spelled 'Boyville.' William de Boswill received payment of money for Sir Alexander de Seton, 1329, and Roger de Bosseuyll or Bosvyll was custumar and burgess of Edinburgh, 1368-9. Roger de Boswell married Marietta, daughter and co-heiress of Sir William Lochore of that Ilk, about middle of fourteenth century and was first of the family settled in Fife. " [5]

Early History of the Doswell family

Notable among the family at this time was Macdonald Bosville of Sleat, Chief of the MacDonalds; and James Boswell (1740-1795), famous biographer of "The Life of Dr. Johnson," the great lexicographer. John Bossewell (fl. 1572), was an English "heraldic writer, was, according to his own statement, a northern man, and probably a member of the family of Bosvile, established for many generations in the neighbourhood of Doncaster. " [6] John Boswell (1698-1756), was an English author, descended...
Another 75 words (5 lines of text) are included under the topic Early Doswell Notables in all our PDF Extended History products and printed products wherever possible.

Migration of the Doswell family to Ireland

Some of the Doswell family moved to Ireland, but this topic is not covered in this excerpt. More information about their life in Ireland is included in all our PDF Extended History products and printed products wherever possible.

Doswell Settlers in New Zealand in the 19th Century