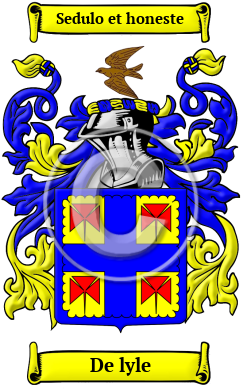 The surname De lyle was first found in Oxfordshire at Shirburn, a parish, in the union of Thame, hundred of Pirton. "This place was the property of Richard, Earl of Cornwall, and passed to Alice, wife of Warine de L'lsle, whose descendant of the same name obtained from Edward III. licence to embattle his house here. Shirburn Castle, the seat of the Earl of Macclesfield, is surrounded by a moat, over which is a drawbridge; it contains a noble hall, an armoury, and a suite of splendid apartments, with a fine collection of paintings, including a portrait of Catherine Parr, wife of Henry VIII." [1]

"The family are descended from Radulphus de Insula, temp. William the Conqueror." [3]

Some of the family later held estates at Dibden in Southampton. "The church, a very ancient structure, has been thoroughly repaired and repewed, at a cost of £500, and some windows of painted glass have been inserted; it contains monuments to the Lisle family, who were lords of the manor, and of whom Lady Lisle was condemned to death by Judge Jeffries (Jeffreys)." [1]

Despite the aforementioned, Scotland has traditionally held the lion's share of the family and most people claim descent from there as "a family of this name were barons of Duchal in Renfrewshire as early as the beginning of the thirteenth century. They were of the same stock as the Northumberland family of 'de Insula' (as the name appears in Latin) or 'Lisle' (de Lisle, Delisle in French). The first of the name in Scotland appears to have been Radulphus or Ralph de Insula, a follower of the Steward, who witnessed the gift by Baldwin de Bigre, sheriff of Lanharc (Lanark), of the church of Innerkyp to the monks of Paisley, c. 1170." [4]

Notable among the family at this time was Sir John Lisle (1610-1664), an English lawyer and politician who supported the Parliamentarian cause in the English Civil War, one of the Regicides of King Charles I of England, he was assassinated by an agent of the crown while in...
Another 47 words (3 lines of text) are included under the topic Early De lyle Notables in all our PDF Extended History products and printed products wherever possible.

Migration of the De lyle family to Ireland

Some of the De lyle family moved to Ireland, but this topic is not covered in this excerpt.
Another 76 words (5 lines of text) about their life in Ireland is included in all our PDF Extended History products and printed products wherever possible.

Migration of the De lyle family