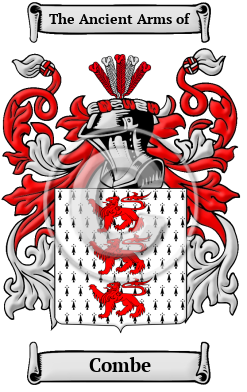 The origins of the Combe name come from when the Anglo-Saxon tribes ruled over Britain. The name Combe was originally derived from a family having lived in a small valley; the surname Combe is often derived from the Old English word cumb, which means valley. In this case, it belongs to the class of topographic surnames, which were given to people who resided near physical features such as hills, streams, churches, or types of trees. Alternately, the surname Combe may be derived from residence in one of the many places called Comb, Combe, or Coombe. In this case, it belongs to the large category of Anglo-Saxon habitation names, which are derived from pre-existing names for towns, villages, parishes, or farmsteads.

Early Origins of the Combe family

Later the Yorkshire Poll Tax Rolls of 1379 included: Robertas Combe; and Radulphus de Combe; while in Norfolk, Edmund de la Comb was listed there 16 Edward I. [5]

Early History of the Combe family

Before English spelling was standardized a few hundred years ago, spelling variations of names were a common occurrence. Elements of Latin, French and other languages became incorporated into English through the Middle Ages, and name spellings changed even among the literate. The variations of the surname Combe include Coombe, Combs, Coombs, Comes, Combes, Combe, Coombes, Cumbe, Coumbes, Coames, Coambes, Cumbes, Cumes, Cummes, Cume, Coomes, Coames, Cooms, Coumes, Coume, Cooms, Coom, Coomb, Comb and many more.

Another 27 words (2 lines of text) are included under the topic Early Combe Notables in all our PDF Extended History products and printed products wherever possible.

In France, the name Combe is the 483rd most popular surname with an estimated 9,267 people with that name. [6]

Combe migration to the United States +

Combe Settlers in United States in the 17th Century

Combe Settlers in United States in the 18th Century

Combe Settlers in United States in the 19th Century

Combe Settlers in Australia in the 19th Century

Combe Settlers in West Indies in the 17th Century