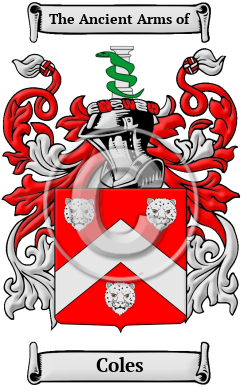 The earliest origins of the Coles surname date from the ancient Anglo-Saxon culture of Britain. Their name reveals that an early member was a person with a dark complexion. Further research revealed that the name is derived from the Old English word col, which meant dark.

Early Origins of the Coles family

The surname Coles was first found in Somerset or Wiltshire at Cole. The Somerset hamlet is in the parish of Pitcomb, union of Wincanton, hundred of Bruto; while the Wiltshire parish is in the union, and hundred of Malmesbury, Malmesbury and Kingswood. [1]

"Essentially south of England names, especially in the south - west, rarely occurring north of a line drawn west from the Wash. Cole is best distributed and has its principal homes in Devon and Wiltshire. Coles is most numerous in Somerset. Both names, strangely enough, are rare in Cornwall. Cole was a very ancient Teutonic name; there are places of the name in Somerset and Wiltshire, a circumstance that may perhaps explain the frequency of both names in Somerset and of Cole in Wiltshire." [2]

Much farther to the north in Scotland, the name was "one of the many forms assumed by the name Macdowall." [3]

Early History of the Coles family

It is only in the last few hundred years that the English language has been standardized. For that reason, early Anglo-Saxon surnames like Coles are characterized by many spelling variations. As the English language changed and incorporated elements of other European languages, even literate people changed the spelling of their names. The variations of the name Coles include: Coles, Coals and others.

Distinguished members of the family include Elisha Coles (ca 1608-1688), an English lexicographer and stenographer, chorister of Magdalen College, Oxford His nephew Elisha Coles (1640?-1680), was a lexicographer and stenographer, son of John Coles, schoolmaster of Wolverhampton. [4] Gilbert Coles (1617-1676), was an English divine, son of Edmund Coles, priest...
Another 47 words (3 lines of text) are included under the topic Early Coles Notables in all our PDF Extended History products and printed products wherever possible.

Migration of the Coles family to Ireland

Some of the Coles family moved to Ireland, but this topic is not covered in this excerpt.
Another 47 words (3 lines of text) about their life in Ireland is included in all our PDF Extended History products and printed products wherever possible.

Coles migration to the United States +

Many English families tired of political and religious strife left Britain for the new colonies in North America. Although the trip itself offered no relief - conditions on the ships were extremely cramped, and many travelers arrived diseased, starving, and destitute - these immigrants believed the opportunities that awaited them were worth the risks. Once in the colonies, many of the families did indeed prosper and, in turn, made significant contributions to the culture and economies of the growing colonies. An inquiry into the early roots of North American families has revealed a number of immigrants bearing the name Coles or a variant listed above:

Coles Settlers in United States in the 17th Century

Coles Settlers in United States in the 18th Century

Coles Settlers in United States in the 19th Century

Coles Settlers in Australia in the 19th Century

Coles Settlers in New Zealand in the 19th Century

Coles Settlers in West Indies in the 17th Century

Historic Events for the Coles family +