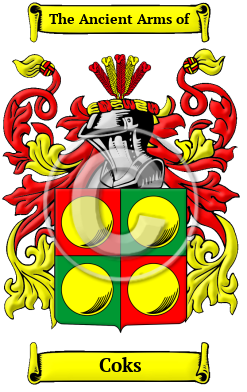 The name Coks is rooted in the ancient Anglo-Saxon culture. It was a name for someone who was a person who bore a fancied resemblance to a rooster. It was applied both to early risers and those who strutted proudly. "Thus 'cock' became the general sobriquet of a sharp and forward lad." [1] Alternatively, the name could have been derived as "a term of endearment, a diminutive, the same as ot or kin, used as a termination." [2]

Early Origins of the Coks family

The surname Coks was first found in Shropshire where the first record of the family was found the Hundredorum Rolls of 1273 as Coc de Slepe.

"Though also scattered about the midland counties, Cox finds its great home in the south of England in the contiguous counties of Dorset and Somerset. It is fairly numerous in the counties of Gloucester, Oxford, and Warwickshire. Rare or absent in the north of England and in the eastern coast counties." [3]

Early History of the Coks family

Coks has been spelled many different ways. Before English spelling became standardized over the last few hundred years, spelling variations in names were a common occurrence. As the English language changed in the Middle Ages, absorbing pieces of Latin and French, as well as other languages, the spelling of people's names also changed considerably, even over a single lifetime. Many variations of the name Coks have been found, including Cox, Coxe and others.

Notables of the family at this time include Richard Cox (c. 1500-1581), English clergyman, Dean of Westminster and Bishop of Ely, Chancellor of the University of Oxford (1547-1552); Charles Cocks (1646-1727), British Member of Parliament for Droitwich and Worcester; Robert Cox...
Another 41 words (3 lines of text) are included under the topic Early Coks Notables in all our PDF Extended History products and printed products wherever possible.

Migration of the Coks family to Ireland

Some of the Coks family moved to Ireland, but this topic is not covered in this excerpt.
Another 76 words (5 lines of text) about their life in Ireland is included in all our PDF Extended History products and printed products wherever possible.

Migration of the Coks family

In an attempt to escape the chaos experienced in England, many English families boarded overcrowded and diseased ships sailing for the shores of North America and other British colonies. Those families hardy enough, and lucky enough, to make the passage intact were rewarded with land and a social environment less prone to religious and political persecution. Many of these families became important contributors to the young colonies in which they settled. Early immigration and passenger lists have documented some of the first Cokss to arrive on North American shores: William Coxe, who settled in Virginia in 1610; Anne Coxe, who settled in Maryland in 1633; James Cox, who came to Virginia in 1652; Henry Cox, who settled in Maryland in 1653.