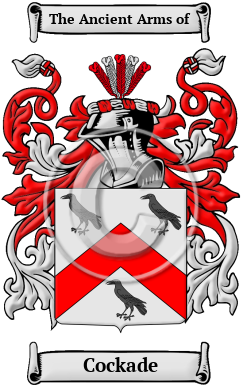 The name Cockade is from the rugged landscape of Wales. It is a Celtic name that was derived from Cudde or Codling, which were both pet-forms of the personal name Cuthbert. [1]

During the 16th century, a codder was a worker in leather, a saddler, or a peltmonger. Thus, Cockade may also be an occupational surname applied to someone involved in one of these trades.

Early Origins of the Cockade family

The surname Cockade was first found in Cornwall, where they held a family seat from very ancient times.

"The manor of Methleigh, [in the parish of Breage, Cornwall] was formerly the property of Sir Thomas Arundell, of Truthall in Sithney, from whom it passed by sale to the family of Coode, about the commencement of the last century. In this family it has since remained, and it is now the property of Edward Coode, Esq. of St. Austell." [3]

"In the church [of Morvall, Cornwall there] are memorials for the families of Mayow, Kendall, and Coode. For William Coode who died in 1637, there is a monument containing figures of himself and his wife, in a kneeling attitude. These are in bas relief on slate; behind each of which is a vine, and on four of their principal branches, are death's heads." [3]

Early History of the Cockade family

Compared to other ancient cultures found in the British Isles, the number of Welsh surnames are relatively few, but there are an inordinately large number of spelling variations. These spelling variations began almost as soon as surname usage became common. People could not specify how to spell their own names leaving the specific recording up to the individual scribe or priest. Those recorders would then spell the names as they heard them, causing many different variations. Later, many Welsh names were recorded in English. This transliteration process was extremely imprecise since the Brythonic Celtic language of the Welsh used many sounds the English language was not accustomed to. Finally, some variations occurred by the individual's design: a branch loyalty within a family, a religious adherence, or even patriotic affiliations were indicated by spelling variations of one's name. The Cockade name over the years has been spelled Code, Codd, Codde, Coad, Coade and others.

Prominent amongst the family during the late Middle Ages was Code of Gridley Castle in Devon; and John Coode (c. 1648-1709), born in Penryn, Cornwall, he left England...
Another 27 words (2 lines of text) are included under the topic Early Cockade Notables in all our PDF Extended History products and printed products wherever possible.

Migration of the Cockade family to Ireland

Some of the Cockade family moved to Ireland, but this topic is not covered in this excerpt.
Another 98 words (7 lines of text) about their life in Ireland is included in all our PDF Extended History products and printed products wherever possible.

Migration of the Cockade family

Many people from Wales joined the general migration to North America in the 19th and 20th centuries, searching for land, work, and freedom. Like the many other immigrants from the British Isles, they made a significant contribution to the development of Canada and the United States. The Welsh and their descendents added a rich cultural tradition to the newly developed towns, cities, and villages. An investigation of the immigration and passenger lists has revealed a number of people bearing the name Cockade: George Codd who settled in Virginia in 1643; followed by Walter Code, with his wife and family, settled in Virginia in 1648; and Samuel Code was an early settler in New Hampshire.