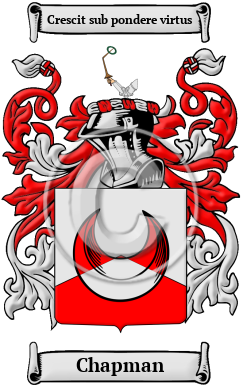 The ancestry of the name Chapman can be traced back to the Anglo-Saxon tribes of Britain. It is a name for a merchant. Chapman is an occupational surname, which belongs to the category of hereditary surnames. Occupational surnames were derived from the primary activity of the bearer. In the Middle Ages, people did not generally live off of the fruits of their labor in a particular job. Rather, they performed a specialized task, as well as farming, for subsistence. Other occupational names were derived from an object associated with a particular activity. The surname Chapman is derived from the Old English word ceapman, which means merchant. [1] Therefore, this surname would have been taken by someone whose primary occupation was that of a merchant. The earliest record of someone bearing the surname Chapman in England was in Cambridgeshire, prior to the Norman Conquest in 1066.

Early Origins of the Chapman family

The surname Chapman was first found in Cambridgeshire, but early rolls proved the widespread use of the name, By example, the Hundredorum Rolls of 1273 listed Thomas le Chapman in Leicestershire and Grante le Chapman in Devon; the Yorkshire Poll Tax Rolls of 1379 had entries for the surname and as a trade, Alicia Shepshank, chapman; Agnes Chapman; Magota de Brandon, chapman; and Henricus Schapman. [2]

"From Kent to the North Riding the descendants of the ancient travelling merchants, or "cheap - men" (Anglo - Saxon Ce'apman) occur in singularly constant numbers. Their preference for the coast counties would seem to show that their travels were sometimes on the seas; yet it would also appear that the attractions of the great metropolis brought them together in numbers in the south - eastern counties. Kent stands foremost as their present abode. " [3]

To the north in Scotland, the earliest "ocurrence of the name seems to be in 1296 when a pardon was granted to a man for causing the death of Ralph Chepman in Dundee." [4] A few years later, William Chapman was provost of Aberdeen in 1327 and is probably the Willelmus dictus Chapman who appears on an inquisition in the same town in 1333. Hugh called Chepman held a land in fee in the town of Roxburgh in 1338 and King David II granted a charter of the lands of Rotherstoun near Dee to Duncan Chapman. [4]

Walter Chepman (1473?-1538?), was a Scottish printer, burgess and merchant in Edinburgh. "The years of Chepman's birth and death are not precisely known, probably 1473-1538. His name, frequently misspelt Chapman, was by himself always written and printed Chepman. He first appears in 1494, when a payment of 20l. was made to him and Stobo by the treasurer for their services as clerks in the office of the king's secretary." [5]

Early History of the Chapman family

Chapman has been spelled many different ways. Before English spelling became standardized over the last few hundred years, spelling variations in names were a common occurrence. As the English language changed in the Middle Ages, absorbing pieces of Latin and French, as well as other languages, the spelling of people's names also changed considerably, even over a single lifetime. Many variations of the name Chapman have been found, including Chapman, Chappman, Chepman, Cheppman and others.

Distinguished members of the family include Sir John Chapman of Westhampnett, Sussex. George Chapman (1559-1634) was an English poet, scholar, playwright, and translator. He was best remembered for...
Another 27 words (2 lines of text) are included under the topic Early Chapman Notables in all our PDF Extended History products and printed products wherever possible.

Migration of the Chapman family to Ireland

Some of the Chapman family moved to Ireland, but this topic is not covered in this excerpt.
Another 119 words (8 lines of text) about their life in Ireland is included in all our PDF Extended History products and printed products wherever possible.

Chapman migration to the United States +

In an attempt to escape the chaos experienced in England, many English families boarded overcrowded and diseased ships sailing for the shores of North America and other British colonies. Those families hardy enough, and lucky enough, to make the passage intact were rewarded with land and a social environment less prone to religious and political persecution. Many of these families became important contributors to the young colonies in which they settled. Early immigration and passenger lists have documented some of the first Chapmans to arrive on North American shores:

Chapman Settlers in United States in the 17th Century

Chapman Settlers in United States in the 18th Century

Chapman Settlers in United States in the 19th Century

Chapman Settlers in Canada in the 18th Century

Chapman Settlers in Canada in the 19th Century

Chapman Settlers in Australia in the 19th Century

Chapman Settlers in New Zealand in the 19th Century

Historic Events for the Chapman family +

Suggested Readings for the name Chapman +