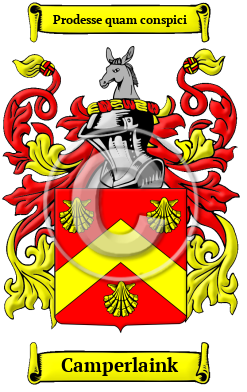 Camperlaink is a name that was brought to England by the ancestors of the Camperlaink family when they migrated with the great wave that followed the Norman Conquest of 1066. Camperlaink is a name for a person who worked as a chamberlain. A chamberlain was one who was in charge of the private chambers of a noble, and later was a high ranking title having derived from the Anglo-Norman French word, chamberlanc. [1]

Early Origins of the Camperlaink family

The surname Camperlaink was first found in Oxfordshire where they claim descent from John, Count de Tankerville, of Tankerville Castle in Normandy who accompanied Duke William on his Conquest of England only to return after the battle of Hastings to his hereditary estates. He left a son in England who became chamberlain to Henry I., and whose son, Richard assumed the surname of Chamberlain from his office. [5]

"The office of royal chamberlain was one of great responsibility in virtue of the fact that until the reign of James I he managed the king's revenue and was head of the Exchequer. The great nobles, also, had each a chamberlain who looked after his lord's business affairs. John Camerarius witnessed a confirmation charter by William the Lion, c. 1175. Walter Camerarius witnessed a charter by Es China, wife of Walter Fitz Alan, before 1177" [1]

The principal line of the descendants were the Chamberlaynes of Sherborne in Oxfordshire. The hamlet of Stoney Thorpe in Warwickshire was home to a branch of the family. "The family of Chamberlayne, formerly of Princethorpe, in the county, has been seated here for many centuries; Henry Thomas Chamberlayne, Esq., is the present owner." [6]

Early History of the Camperlaink family

Before English spelling was standardized a few hundred years ago, spelling variations of names were a common occurrence. Elements of Latin, Norman French and other languages became incorporated into English throughout the Middle Ages, and name spellings changed even among the literate. The variations of the surname Camperlaink include Chamberlain, Chamberlayne, Chamberlaine, Chamblayn, Chamberlin, Camberlain, Camberlan, Camblayn and many more.

Outstanding amongst the family at this time was Edward Chamberlayne (1616-1703), an English writer, best known as the author of The Present State of England; William Chamberlayne (1619-1689), an English poet and physician. Pierre (Peter) Chamberlen the Elder (1560-1631), and Peter the Younger (1572-1626), two brothers and sons of Guillaume (William) Chamberlen (c.1540-1596), a Huguenot surgeon who fled from Paris to England in 1576, famous for inventing the modern use of obstetrical forceps, a family secret kept for two centuries - the original forceps were found in 1813 under a trap door in Woodham Mortimer Hall. Nicholas Chamberlaine (1632-1715), was an English priest...
Another 143 words (10 lines of text) are included under the topic Early Camperlaink Notables in all our PDF Extended History products and printed products wherever possible.

Migration of the Camperlaink family to Ireland

Some of the Camperlaink family moved to Ireland, but this topic is not covered in this excerpt.
Another 43 words (3 lines of text) about their life in Ireland is included in all our PDF Extended History products and printed products wherever possible.

Migration of the Camperlaink family

In England at this time, the uncertainty of the political and religious environment of the time caused many families to board ships for distant British colonies in the hopes of finding land and opportunity, and escaping persecution. The voyages were expensive, crowded, and difficult, though, and many arrived in North America sick, starved, and destitute. Those who did make it, however, were greeted with greater opportunities and freedoms that they could have experienced at home. Many of those families went on to make important contributions to the young nations in which they settled. Early immigration records have shown some of the first Camperlainks to arrive on North American shores: Edward Chamberlain who settled in Woburn, Massachusetts in 1655; Henry Chamberlain settled in Hingham, in 1638; John Chamberlain settled in Charlestown, 1653.