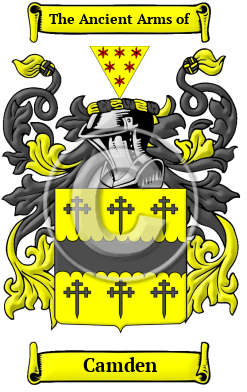 The Anglo-Saxon name Camden comes from when the family resided in Gloucestershire, where they held a family seat at Chipping Campden. The name is derived from the Old English "camp," meaning "a battle or war." [1]

"This place, which is of very great antiquity, is supposed to have derived its name from an encampment formed prior to a battle between the Mercians and the West Saxons. In 689, a congress of the Saxon chiefs, confederated for the conquest of Britain, was held here." [2]

Alternatively the name could have originated in Camden-Town, a chapelry, in the parish of St. Pancras, Holborn division of the hundred of Ossulstone, county of Middlesex. "This place takes its name from the Marquess Camden, lessee of the prebendal manor of Cantelows, in which it is situated." [2]

Early Origins of the Camden family

The surname Camden was first found in Gloucestershire at Chipping Campden. Here the first record of the family was found in 1273. At that time, the Hundredorum, Rolls listed Hugh de Campeden as holding lands there at that time. The same rolls also listed John de Campeden in Northamptonshire. [3]

Early History of the Camden family

This web page shows only a small excerpt of our Camden research. Another 120 words (9 lines of text) covering the years 1190, 1551, 1623, 1551 and 1623 are included under the topic Early Camden History in all our PDF Extended History products and printed products wherever possible.

Before English spelling was standardized a few hundred years ago, spelling variations of names were a common occurrence. Elements of Latin, French and other languages became incorporated into English through the Middle Ages, and name spellings changed even among the literate. The variations of the surname Camden include Camden, Campden and others.

Notables of the family at this time include William Camden (1551-1623), English antiquarian, historian, topographer, and herald, best known as author of Britannia, the first chorographical survey of the islands of Great Britain and Ireland, and the Annales, the first detailed historical account of the reign of Elizabeth I of England. Born in the Old Bailey, London, his father Sampson Camden...
Another 61 words (4 lines of text) are included under the topic Early Camden Notables in all our PDF Extended History products and printed products wherever possible.

In the United States, the name Camden is the 10,382nd most popular surname with an estimated 2,487 people with that name. [4]

Camden migration to the United States +

Camden Settlers in United States in the 19th Century

Historic Events for the Camden family +