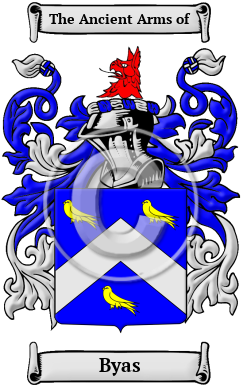 The Byas family chronicle reaches back into history to the Boernician tribe of ancient Scotland. The Byas family lived in or near the place named Byers in Scotland. The place-name, Byers, derives from the Old English word byre, which means cattle shed. [1] Thus, Byers is of two derivations, topographical and habitational.

Alternatively, the name could have been Norman in origin originating a "the chateau of Biars in the canton of Isigni, La Manche, Normandy. " [2] [3]

Early Origins of the Byas family

The surname Byas was first found in East Lothian, where they held a family seat from ancient times. One of the first records of the name related to the place name as in David de Lindsay the younger, also called David Lindsay of the Byres (died 1279), a 13th century Scottish knight and crusader. John de Pyres appears as a monk of Neubotle in 1309. Thome de Byris owned a tenement in Edinburgh in 1392, and in 1534 Thomas Byrs was admitted burgess of Aberdeen. [4]

Early History of the Byas family

Spelling variations occur frequently in Scottish names that date from the medieval era. They result from a general lack of grammatical rules and the tendency to spell names according to sound. Byas has been spelled Byers, Byres, Byer, Buyers, Byris and others.

Notable amongst the family at this time was Nicholas Byer (d. 1681), Norwegian painter, a native of Drontheim in Norway. He practised portrait and historical painting, and...
Another 27 words (2 lines of text) are included under the topic Early Byas Notables in all our PDF Extended History products and printed products wherever possible.

Migration of the Byas family to Ireland

Some of the Byas family moved to Ireland, but this topic is not covered in this excerpt.
Another 57 words (4 lines of text) about their life in Ireland is included in all our PDF Extended History products and printed products wherever possible.

Migration of the Byas family

In the 20th century, the ancestors of many of those Boernician-Scottish people still populate North America. They distributed themselves on either side of the border at the time of the War of Independence. United Empire Loyalists went north to Canada and those who wanted a new nation stayed south. Both groups went on to found great nations. Some of the first North American settlers with Byas name or one of its variants: Henry, Jacob, and Nicholas Byer who arrived in Philadelphia, Pennsylvania between 1738 and 1844; Will Byers settled in Georgia in 1734; Alexander, Robert and John Byers arrived in Philadelphia between 1816 and 1867.

Historic Events for the Byas family +