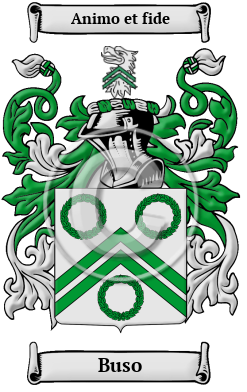 The Norman Conquest of England in 1066 added many new elements to an already vibrant culture. Among these were thousands of new names. The Buso family lived in Hampshire. The name was given to settlements located near a hill, and is from the Old English beorg, which means hill. It is from one of many English settlements so named that this family take their name. [1]

Early Origins of the Buso family

The surname Buso was first found in Hampshire where they were descended from Hubert de Burgh, who became Lord of the Manor of Tichfield in that county.

"Robert de Burgh, Earl of Moreton in Normandy, son of Harlowen de Burgh, by Arlotta, his wife, mother of William the Conqueror, participated with his half-brother in the triumph at Hastings, was created Earl of Cornwall, and received, as a further recompense, grants of seven hundred and ninety-three manors. This potent noble left one son, William Earl of Cornwall, who, rebelling against the first Henry, joined Robert of Normandy, and led the van at the battle of Tenchebray. In this conflict, after displaying great personal valour, he fell into the hands of his opponents and was sent prisoner to England, where he was treated with much cruelty, the king causing his eyes to be put out, and detaining him in captivity for life. " [2]

The township of Middleton in Lancashire is of particular historical importance to the family. "In the reign of Henry III., Hubert de Burgh, (c. 1170-1243) Earl of Kent, Lord Chief Justice of England, had a grant of the whole of Wyresdale, with remainder to his heirs: he left two sons, from one of whom descended the Burghs or Borroughs, of Gainsborough; and it is probable that William de Burgh, of Middleton, who died about 1323, was descended also from the chief justice." [3]

Again in Lancashire another early record was found: William de Burgh, rector of the church of St. Elphin, Warrington, Lancashire in 1374. [4]

John Borough, Burgh or De Burgo (d. 1386), was an English divine, D.D. of Cambridge and rector of Collingham, Nottinghamshire. [5]

"Borough, in Northam [Devon], made ever famous by Kingsley in its association with his Sir Amyas Leigh, was the seat of a family of the same name, which produced at least two very eminent Devonshire seamen Steven and William Borough. Steven Borough, though little known, is entitled to a very honourable place in the list of Devon worthies. Born in 1525, he was master of the largest vessel, the Edward Bonaventure, in Sir Hugh Willoughby's luckless voyage to the Arctic Seas, planned by Cabot, and which would have been an utter failure had not Borough and his comrade, Richard Chancellor, the pilot-major of the fleet, determined to prosecute their voyage after they had been separated from Willoughby by a storm. In 1556, Borough went again to the Northern Seas in a pinnace, to carry forward the intentions of the original expedition, and to find a way by the north-east to Cathay. He made the most remarkable voyage in the annals of Arctic exploration. The little vessel drew only four feet of water. She had for crew only the brothers Borough and eight others; yet she entered the Kara Sea, and reached a point beyond which no navigator went until our own days English, Dutch, and Russian failing each in turn." [6]

Early History of the Buso family

Norman surnames are characterized by a multitude of spelling variations. The frequent changes in surnames are largely due to the fact that the Old and Middle English languages lacked definite spelling rules. The introduction of Norman French to England, as well as the official court languages of Latin and French, also had pronounced influences on the spelling of surnames. Since medieval scribes and church officials recorded names as they sounded, rather than adhering to any specific spelling rules, it was common to find the same individual referred to with different spellings. The name has been spelled Burrough, Burgh, Borrows, Burrowes, Burroughs, Burrows, Burroughes and many more.

Outstanding amongst the family at this time was Benedict Burgh (fl. 1472), English clerk and translator, Rector of Sandon, Essex, in 1440, Archdeacon of Colchester in 1465, a prebendary of St. Paul's in 1472; Stephen Borough (1525-1584), an English navigator, born on an estate of the some name in the parish of Northam, Devonshire, on 25 Sept. 1525. His son, Christopher Borough (fl. 1579-1587), was the chronicler of one of the most interesting journeys into Persia recorded in the pages of Hakluyt. [5] Stephen's younger brother William Borough (1536-1599), was also an English navigator and author, born at Northam, Devonshire, in 1536...
Another 172 words (12 lines of text) are included under the topic Early Buso Notables in all our PDF Extended History products and printed products wherever possible.

Migration of the Buso family to Ireland

Some of the Buso family moved to Ireland, but this topic is not covered in this excerpt.
Another 230 words (16 lines of text) about their life in Ireland is included in all our PDF Extended History products and printed products wherever possible.

Buso migration to the United States +

Many English families emigrated to North American colonies in order to escape the political chaos in Britain at this time. Unfortunately, many English families made the trip to the New World under extremely harsh conditions. Overcrowding on the ships caused the majority of the immigrants to arrive diseased, famished, and destitute from the long journey across the stormy Atlantic. Despite these hardships, many of the families prospered and went on to make invaluable contributions to the development of the cultures of the United States and Canada. Early North American immigration records have revealed a number of people bearing the name Buso or a variant listed above:

Buso Settlers in United States in the 19th Century