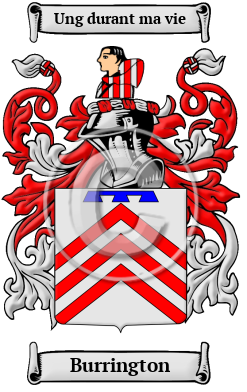 Burrington is a name whose history on English soil dates back to the wave of migration that followed the Norman Conquest of England of 1066. The Burrington family lived in parishes at Cambridge, Berkshire, Somerset and Gloucester. Their original family seat was at Barentin in Normandy, and they were one of a group of families that draw their name from this location. [1]

Early Origins of the Burrington family

The surname Burrington was first found in Cambridge and Lincolnshire where they have held a family seat from very ancient times. Barrington or De Barenton was located near Caudebec, Normandy. [1]

Early feudal rolls provided the king of the time a method of cataloguing holdings for taxation, but today they provide a glimpse into the wide surname spellings in use in early times.

"Some of the families of this name claim a Norman descent, and derive their name from Barenton. The Irish Baronet deduces himself from a Saxon progenitor, keeper of the Forest of Hatfield in the days of the Conqueror. Le Neve derives the name from an imaginary Saxon called Barentine, but according to Sir Jonas Barrington's Memoirs, the family's Norman origin is unquestionable. The surname was variously written Barentin, Barentyn, Barenton, Barentine, and at length took the English form of Barrington, There are parishes bearing this name in four English counties." [4]

Early History of the Burrington family

Outstanding amongst the family at this time was John Berrington, High Sheriff of Herefordshire in 1588; Sir Francis Barrington, 1st Baronet (ca. 1570-1628), an English lawyer and politician, Member of Parliament for Essex (1601-1611) and (1621-1628); his son, Sir Thomas Barrington, 2nd Baronet (died 1644)...
Another 44 words (3 lines of text) are included under the topic Early Burrington Notables in all our PDF Extended History products and printed products wherever possible.

Migration of the Burrington family to Ireland

Some of the Burrington family moved to Ireland, but this topic is not covered in this excerpt.
Another 56 words (4 lines of text) about their life in Ireland is included in all our PDF Extended History products and printed products wherever possible.

Burrington Settlers in Australia in the 19th Century