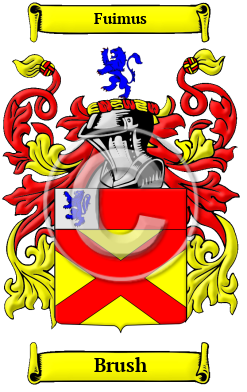 Early Origins of the Brush family

The surname Brush was first found in Suffolk, where the name first appeared in the early 14th century and remained there for centuries to come. Many early surnames were representative of the profession to which the first bearer belonged. The word "brush" was the same in middle English as it is today, and the name was probably first given to a man who manufactured brushes.

Early History of the Brush family

This web page shows only a small excerpt of our Brush research. Another 36 words (3 lines of text) covering the years 1327 and 1524 are included under the topic Early Brush History in all our PDF Extended History products and printed products wherever possible.

More information is included under the topic Early Brush Notables in all our PDF Extended History products and printed products wherever possible.

In the United States, the name Brush is the 5,206th most popular surname with an estimated 4,974 people with that name. [1]

Brush migration to the United States +

Brush Settlers in United States in the 17th Century

Brush Settlers in United States in the 18th Century

Brush Settlers in United States in the 19th Century

Brush Settlers in Canada in the 18th Century

Suggested Readings for the name Brush +