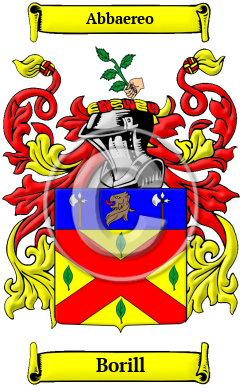 Early Origins of the Borill family

The surname Borill was first found in North Yorkshire at Burrill, a small village in the Hambleton district that dates back to the Domesday Book of 1086 where it was listed as Borel. [1] It literally meant "hill with a fort," from the Old English words "burh" + "hyll." [2]

Early History of the Borill family

Notable amongst the family name during their early history was Abraham Burrell (1589-1657), an English politician, Member of Parliament for Huntingdon (1645-1653), supported the Parliamentary cause in the English Civil War. Robert Birrel (fl. 1567-1605), was a Scottish diarist and Burgess of Edinburgh. "There is not much minuteness in the record of events till about 1567, when Birrel probably began to keep a note of them. There is no evidence in the 'Diary' regarding the political or religious views of the writer...
Another 81 words (6 lines of text) are included under the topic Early Borill Notables in all our PDF Extended History products and printed products wherever possible.

Migration of the Borill family to Ireland

Some of the Borill family moved to Ireland, but this topic is not covered in this excerpt.
Another 66 words (5 lines of text) about their life in Ireland is included in all our PDF Extended History products and printed products wherever possible.

Borill migration to the United States +

Borill Settlers in United States in the 17th Century