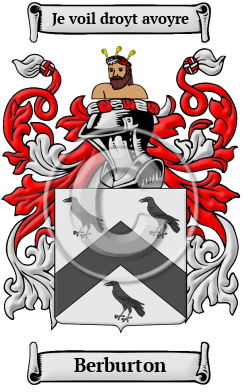 The name Berburton reached English shores for the first time with the ancestors of the Berburton family as they migrated following the Norman Conquest of 1066. The Berburton family lived in Cheshire, at the village and parish of Warburton, which was acquired by the Duttons as early as temp. Henry II, but it was not until the reign of Edward I., or II., that this territorial name was assumed by Sir Peter de Dutton. [1]

Early Origins of the Berburton family

The surname Berburton was first found in Cheshire at Warburton, now part of Greater Manchester, where they were descended from Sir Peter de Dutton, a Crusade knight, who in turn was descended from Rollo, the first invader and Duke of Normandy in 890. His Family Crest "a Saracen's head is still borne by the Warburtons referring to the Holy Land, and probably gained by some heroic exploit in the expedition. " [1] The source continues by referring to an earlier source: "This Galfrid lived in 1244. He was servynge his prynce, and vanquyshed a Sarrazin in combate - then begynnynge to seale with a Sarrasins's head" [1] Reader's Note: a seal(e) was typically an early form of a crest. Yet another source claims the family is descended from William of Eu, through Odard, nephew of Lupus, great Earl of Chester, who was a nephew of William the Conqueror. They were granted the barony of Dutton at the Conquest in 1066. [2] The Domesday Book also lists the spelling of the place name as Wareburgetune. Literally, the place name means "farmstead or village of a woman called Waerburh," having derived from the Old English personal name + tun. [3]

Early History of the Berburton family

Before English spelling was standardized a few hundred years ago, spelling variations of names were a common occurrence. Elements of Latin, Norman French and other languages became incorporated into English throughout the Middle Ages, and name spellings changed even among the literate. The variations of the surname Berburton include Warburton, Warbleton, Wareburton and others.

Outstanding amongst the family at this time was Sir Peter Warburton (d. 1550) of Arley, Cheshire; and his grandson, Peter Warburton (1588-1666), an English barrister and judge; Sir George Warburton, 1st Baronet (1622-1676), first of the Warburton Baronetcy, of Arley in the County of Chester; Sir Peter Warburton, 2nd Baronet (died 1698)...
Another 51 words (4 lines of text) are included under the topic Early Berburton Notables in all our PDF Extended History products and printed products wherever possible.

Migration of the Berburton family to Ireland

Some of the Berburton family moved to Ireland, but this topic is not covered in this excerpt.
Another 47 words (3 lines of text) about their life in Ireland is included in all our PDF Extended History products and printed products wherever possible.

Migration of the Berburton family

In England at this time, the uncertainty of the political and religious environment of the time caused many families to board ships for distant British colonies in the hopes of finding land and opportunity, and escaping persecution. The voyages were expensive, crowded, and difficult, though, and many arrived in North America sick, starved, and destitute. Those who did make it, however, were greeted with greater opportunities and freedoms that they could have experienced at home. Many of those families went on to make important contributions to the young nations in which they settled. Early immigration records have shown some of the first Berburtons to arrive on North American shores: Ann Warburton and her husband who settled in Virginia in 1656; Thomas Warbleton settled in Virginia in 1653(probably the husband of Ann); Edie Warburton settled in Maryland in 1718.