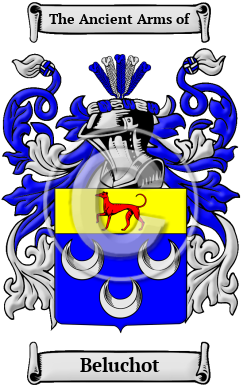 The surname Beluchot was first used as a surname by the people of ancient French region of Gascogne. It was a name for a person distinguished by great physical beauty. Interestingly, the name Beluchot was originally derived from the French words, "la belle," which means, " the beautiful."

Early Origins of the Beluchot family

The surname Beluchot was first found in Gascony (French: Gascogne), an area of southwest France bordering Spain, that was part of the "Province of Guyenne and Gascony" prior to the French Revolution, where they held a family seat in the honor of the seigneurie of De Labels, a village in the Basses-Pyrénées in the arrondisement of de Mauléon.

Early History of the Beluchot family

This web page shows only a small excerpt of our Beluchot research. Another 71 words (5 lines of text) covering the years 1650, 1573, 1674, 1734, 1703, 1696 and 1768 are included under the topic Early Beluchot History in all our PDF Extended History products and printed products wherever possible.

Changes of spelling have occurred in most surnames. The earliest explanation is that during the early development of the French language, names were not yet fixed in spelling. Usually a person gave his version of his name, phonetically, to a scribe, a priest, or a recorder. This depended on accent, and local accents frequently changed the spelling of a name. Some variables were adopted by different branches of the family name. Hence, there are some spelling variations of the name Beluchot, including Lebel, LeBel, LaBelle, Belle, Bell, Labelle, Label, LaBell, LaBel, LeBelle, LeBaile, LaBaile, Lebaile and many more.

Notable amongst the family at this time was Firmin Lebel (d. 1573), French composer and choir director; Alexis-Simon Belle (1674-1734), French painter, member of well known family of painters...
Another 29 words (2 lines of text) are included under the topic Early Beluchot Notables in all our PDF Extended History products and printed products wherever possible.

Migration of the Beluchot family

Migration from France to New France or Quebec as it was now more popularly called, continued from France until it fell in 1759. By 1675, there were 7000 French in Quebec. By the same year the Acadian presence in Nova Scotia, New Brunswick and Prince Edward Island had reached 500. In the treaty of Utrecht, the Acadians were ceded by France to Britain in 1713. In 1755, 10,000 French Acadians refused to take an oath of allegiance to England and were deported. They found refuge in Louisiana. In 1793, the remaining French in these provinces came under British rule. Meanwhile, in Quebec, the French race flourished, founding in Lower Canada, one of the two great solitudes which became Canada. Many of this distinguished family name Beluchot were prominent in social, cultural, religious and political affairs in France and New France. Amongst the settlers in North America with this distinguished name Beluchot were Nicolas Lebel who arrived in Quebec from Normandy in 1657; Pierre Lebel arrived in Quebec from Ile-de-France in 1724; Guillaume LaBelle arrived in Quebec from Normandy in 1671.