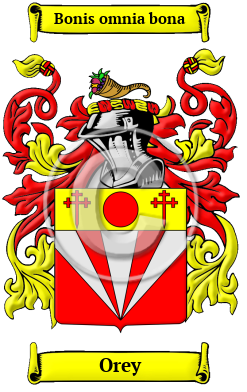 Early Origins of the Orey family

The surname Orey was first found in Renfrewshire (Gaelic: Siorrachd Rinn Friù), a historic county of Scotland, today encompassing the Council Areas of Renfrew, East Renfrewshire, and Iverclyde, in the Strathclyde region of southwestern Scotland.

"It is a numerous name in the West end of the shire of Renfrew in the parish of Lochwinnoch. Hew Orr rendered homage in 1296 [to King Edward I of England]. Four persons named Or were summoned to answer charges made against them by the abbot of Paisley, 1503. John Or was witness in Glasgow, 1550, Matthew Ore in Paisley, 1654, and James Orre in Barneth, 1678." [3]

There are also scattered entries for the family in England. The Hundredorum Rolls of 1273 list Egidiu de Or in Kent and later the Yorkshire Poll Tax Rolls of 1379 include: Matilda Orre; and Johannes Ore. [4]

And to the far south of England in Devon, "the original Cathedral of Crediton was dedicated to the Virgin, and stood on or near the site of the present Collegiate Church of the Holy Cross. Herein it is recorded that on the 1st of August, 1315, one Thomas Orey, of Keynesham, who had been totally blind, recovered his sight after spending two days in prayer before the altar of St. Nicholas. Bishop Stapledon, being satisfied of the truth of the miracle, ordered the bells to be rung and a solemn thanksgiving offered, and set forth the event in his 'Register.' " [6]

Early History of the Orey family

In the Middle Ages, the translation between Gaelic and English was not a highly developed process. Spelling was not yet standardized, and so, an enormous number of spelling variations appear in records of early Scottish names. Orey has appeared as Orr, Ore, Orre, Orey and others.

Notable amongst the family at this time was Hugh Orr (1717-1798), Scottish born inventor, son of Robert Orr of Lochwinnoch, Renfrewshire, born at Lochwinnoch on 13 Jan. 1717. "Brought up to the trade of a gunsmith and door-lock filer, at the age of twenty he emigrated to America, and in June 1740 he settled at Bridgewater, in Massachusetts, where he manufactured scythes and edge-tools. He set up the first trip-hammer ever constructed in Massachusetts, and he succeeded in spreading the manufacture of edge-tools through Massachusetts, Rhode Island, and Connecticut. In 1748 he made five hundred muskets for the province of Massachusetts...
Another 109 words (8 lines of text) are included under the topic Early Orey Notables in all our PDF Extended History products and printed products wherever possible.

Migration of the Orey family to Ireland

Some of the Orey family moved to Ireland, but this topic is not covered in this excerpt.
Another 210 words (15 lines of text) about their life in Ireland is included in all our PDF Extended History products and printed products wherever possible.

Migration of the Orey family

Dalriadan families proliferated in North America. Their descendants still populate many communities in the eastern parts of both the United States and Canada. Some settled in Canada as United Empire Loyalists, in the wake of the American War of Independence. Families on both sides of the border have recovered much of their heritage in the 20th century through Clan societies and highland games. Analysis of immigration records indicates that some of the first North American immigrants bore the name Orey or a variant listed above: Alexander Orr who arrived in New York state in 1803; Arthur, Charles, George, Hannah, James, John, Martha, Mary, Patrick, Robert, Samuel, Thomas and William all arrived in Pennsylvania between 1840 and 1860..

Motto: Bonis omnia bona
Motto Translation: All things are good to the good.