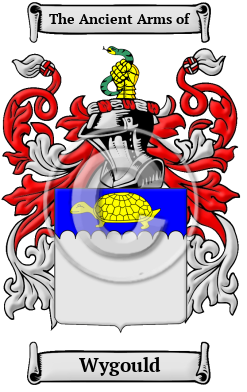 The Wygould family's name is derived from the ancient Norman culture that was established in Britain following the Norman Conquest of island in 1066. Their name originated with an early member who was a Norman or an excessively religious person. Normans were referred to as Bigots by the French, although the meaning of the word is unknown. After the 15th century, a nickname adapted from the phrase by God took on the form Bigot. There is some suggestion that the name in Normandy had been Wigot, and there was a line descended from Wigot de St.Denis, a great nobleman of Normandy, who made grants to Cerisy Abbey in 1042, and in 1050 subscribed a charter of Duke William at the head of the Norman barons. [1]

Early Origins of the Wygould family

The surname Wygould was first found in Essex at Dunmow and Finchingfield, where they were granted lands by King William after the Norman Conquest in 1066. Roger Bigod is also listed in Domesday Book; he was a Sheriff, with large land holdings in Essex, Norfolk and Suffolk. Marston-Biggott in Somerset was an ancient family seat. "This place derives the affix to its name from the Bigott family, to whom the manor for several centuries belonged, and the site of whose ancient mansion is still marked by the moat." [2]

Early History of the Wygould family

Spelling variations of forenames and surnames were common. Originally all records were in Latin and translating a record, whether it was a surname or village name was dependent on a verbal translation into the language of the times. Languages evolved too and that complicated entries. Spellings often changed in a person’s lifetime in various rolls (censuses) of the time. Many variations of the name Wygould have been found, including Bigot, Bigode, Bygod, Begod, Bigod, Wigot, Bidgood and many more.

Outstanding amongst the family at this time was Roger le Bigod (1150-1220), son of Hugh Bigod, 2nd Earl of Norfolk, who was recorded on the Falkirk Roll. This roll was a list of those at the Battle of Falkirk (July 22 1298), when the forces of Edward I defeated a Scottish army under William Wallace. Sir Francis...
Another 55 words (4 lines of text) are included under the topic Early Wygould Notables in all our PDF Extended History products and printed products wherever possible.

Migration of the Wygould family to Ireland

Some of the Wygould family moved to Ireland, but this topic is not covered in this excerpt. More information about their life in Ireland is included in all our PDF Extended History products and printed products wherever possible.

Migration of the Wygould family

For many English families, the social climate in England was oppressive and lacked opportunity for change. For such families, the shores of Ireland, Australia, and the New World beckoned. They left their homeland at great expense in ships that were overcrowded and full of disease. Many arrived after the long voyage sick, starving, and without a penny. But even those were greeted with greater opportunity than they could have experienced back home. Numerous English settlers who arrived in the United States and Canada at this time went on to make important contributions to the developing cultures of those countries. Many of those families went on to make significant contributions to the rapidly developing colonies in which they settled. Early North American records indicate many people bearing the name Wygould were among those contributors: Richard Bidgood who settled in Boston Massachusetts in 1638; and V. Bigot who settled in San Francisco Cal. in 1851. In Newfoundland, Benjamin Bidgood was a juror in St. John's in 1751.