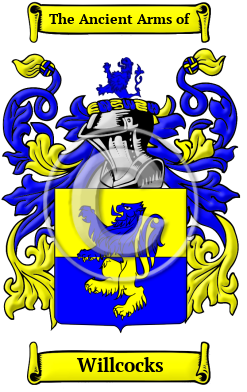 Willcocks is a name that dates far back into the mists of early British history to the days of the Anglo-Saxon tribes. It is derived from William or Wilhelm. Tracing the origin of the name further, we found the name Willcocks was originally derived from the Germanic elements will, meaning resolve, helm, meaning protection, and cock or cox, an affectionate or diminutive suffix commonly used in ancient times. With the additional suffix, cox, the name was taken to mean the son of little William. [1]

Early Origins of the Willcocks family

Early History of the Willcocks family

It is only in the last few hundred years that the English language has been standardized. For that reason, early Anglo-Saxon surnames like Willcocks are characterized by many spelling variations. As the English language changed and incorporated elements of other European languages, even literate people changed the spelling of their names. The variations of the name Willcocks include: Wilcox, Wilcocks, Willock, Wallock and others.

Distinguished members of the family include Nicolaus Wollick (c. 1480-1541), English music theorist Robert Willcox (1558-1588), was an English Catholic martyr (one of the Oaten Hill Martyrs) who was hung, drawn and quartered; he was beatified by Pope Pius XI in 1929. John Willock (or Willocks or Willox) (c. 1515-1585), was a Scottish reformer, a native of Ayrshire and was educated at the University of Glasgow. In 1562 he became rector of All Saints Church, Loughborough in Leicestershire. [5] Thomas Wilcox (1549?-1608), was an English Puritan divine, born about 1549, and was 'fellow or scholar...
Another 92 words (7 lines of text) are included under the topic Early Willcocks Notables in all our PDF Extended History products and printed products wherever possible.

Migration of the Willcocks family to Ireland

Some of the Willcocks family moved to Ireland, but this topic is not covered in this excerpt.
Another 39 words (3 lines of text) about their life in Ireland is included in all our PDF Extended History products and printed products wherever possible.

Willcocks migration to the United States +

Many English families tired of political and religious strife left Britain for the new colonies in North America. Although the trip itself offered no relief - conditions on the ships were extremely cramped, and many travelers arrived diseased, starving, and destitute - these immigrants believed the opportunities that awaited them were worth the risks. Once in the colonies, many of the families did indeed prosper and, in turn, made significant contributions to the culture and economies of the growing colonies. An inquiry into the early roots of North American families has revealed a number of immigrants bearing the name Willcocks or a variant listed above:

Willcocks Settlers in United States in the 17th Century

Willcocks Settlers in Canada in the 18th Century

Willcocks Settlers in Canada in the 19th Century

Willcocks Settlers in Australia in the 19th Century