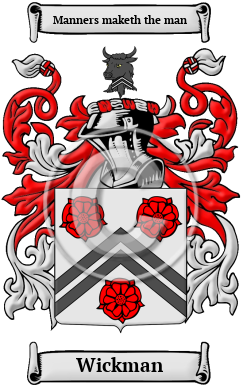 The Wickman surname is a habitation name, derived from any of various places so named.

Early Origins of the Wickman family

The surname Wickman was first found in Hampshire at Wickham, anciently spelt Wykeham, a village and civil parish which dates back to c. 925-941 when it was spelt Wicham. [1] By the time of the Domesday Book of 1086, it was listed as Wicheham. [2]

The "Bishop of Winchester and chancellor of England, took his name from Wickham, near Fareham, Hampshire, where he was born in the summer of 1324. His mother, Sibill Bowade, had some gentle blood, but his father, John Long, is merely described as of free condition. They were poor, and Wykeham was sent to school at Winchester by some unnamed patrons, perhaps Sir Ralph Sutton and Sir John Scures. " [3]

The place name literally means "homestead associated with a vicus (reference to its ancient Roman settlement)." [1]

Early History of the Wickman family

Distinguished members of the family include William Wickham (Wykeham) (1539-1595), an English bishop, Bishop of Lincoln (1584-1595) and Bishop of Winchester in 1595. He "claimed descent from William of Wykeham, Bishop of Winchester, but was a member of a different family. He was...
Another 42 words (3 lines of text) are included under the topic Early Wickman Notables in all our PDF Extended History products and printed products wherever possible.

In the United States, the name Wickman is the 9,876th most popular surname with an estimated 2,487 people with that name. [5]

Migration of the Wickman family to Ireland

Some of the Wickman family moved to Ireland, but this topic is not covered in this excerpt.
Another 32 words (2 lines of text) about their life in Ireland is included in all our PDF Extended History products and printed products wherever possible.

Wickman Settlers in Australia in the 19th Century

Wickman Settlers in New Zealand in the 19th Century