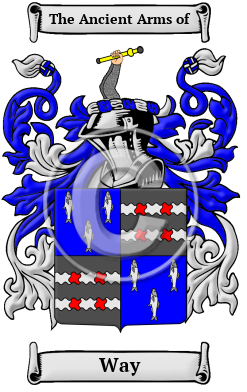 The history of the Way family goes back to the ancient Anglo-Saxon culture of Britain. It is derived from the family living in Dorset where Roger de Waie was listed in the Pipe Rolls of 1194. Later William Waye was recorded in 1236 and Richard de la Weye was found in Devon in 1249.

In Cambridgeshire, John ate Wey was recorded in the Hundredorum Rolls of 1279. The name literally means "dweller by the road (OE weg) or at a place called Atteweye, the name in 1306 of Way in Thorverton (Devon), or at Atway (Devon)." [1]

The same source notes the family could have originated at Waye (Devon, Dorset.) [1]

Early Origins of the Way family

"The name is found in North Devon, temp. Henry VII.; and in that district the termination way is of frequent occurrence in the names of farms, homesteads, and the like, without any reference to, or connection with, roads. The mullets hauriant [(fish swimming)] in the arms of one family have been supposed to be allusive to the river Wey, co. Dorset, in which mullets are abundant. Ate-Wey is one of the forms in Hundredorum Rolls. It may be an old baptismal designation, as Wege or Weghe is found in Domesday Book as the name of a tenant anterior to the Survey." [3]

Early History of the Way family

This web page shows only a small excerpt of our Way research. Another 71 words (5 lines of text) covering the years 1407, 1476, 1407, 1430 and 1442 are included under the topic Early Way History in all our PDF Extended History products and printed products wherever possible.

Until quite recently, the English language has lacked a definite system of spelling rules. Consequently, Anglo-Saxon surnames are characterized by a multitude of spelling variations. Changes in Anglo-Saxon names were influenced by the evolution of the English language, as it incorporated elements of French, Latin, and other languages. Although Medieval scribes and church officials recorded names as they sounded, so it is common to find one person referred to by several different spellings of his surname, even the most literate people varied the spelling of their own names. Variations of the name Way include Way, Waye, Wey, Whey, Weigh, Weghe and others.

Notables of this surname at this time include: William Wey or Way (1407?-1476), an English traveller and author, born in Devonshire apparently in 1407, was educated at Oxford. In 1430, he became fellow of...
Another 34 words (2 lines of text) are included under the topic Early Way Notables in all our PDF Extended History products and printed products wherever possible.

Migration of the Way family to Ireland

Some of the Way family moved to Ireland, but this topic is not covered in this excerpt. More information about their life in Ireland is included in all our PDF Extended History products and printed products wherever possible.

Way migration to the United States +

Searching for a better life, many English families migrated to British colonies. Unfortunately, the majority of them traveled under extremely harsh conditions: overcrowding on the ships caused the majority of the immigrants to arrive diseased, famished, and destitute from the long journey across the ocean. For those families that arrived safely, modest prosperity was attainable, and many went on to make invaluable contributions to the development of the cultures of the new colonies. Research into the origins of individual families in North America revealed records of the immigration of a number of people bearing the name Way or a variant listed above:

Way Settlers in United States in the 17th Century

Way Settlers in United States in the 18th Century

Way Settlers in United States in the 19th Century

Way Settlers in Canada in the 18th Century

Way Settlers in Canada in the 19th Century

Way Settlers in Australia in the 19th Century

Way Settlers in New Zealand in the 19th Century

Historic Events for the Way family +

Suggested Readings for the name Way +