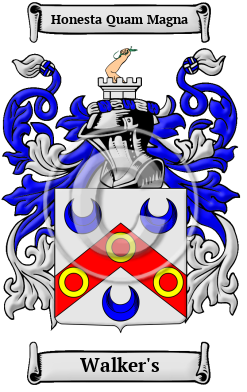 The origins of the Walker's surname lie with the Anglo-Saxon tribes of Britain. The name Walker's began when someone in that family worked as a fuller, whose job it was to scour and thicken raw cloth by beating it and trampling it in water. The surname Walker's is derived from the Old English word wealcere, which means fuller. "In the North of England, fullers' earth is called 'walker's clay,' and a fulling-mill a 'walk-mill.' In Scotland, to walk, still means to full cloth." [1]

Early Origins of the Walker's family

The surname Walker's was first found in Yorkshire, where they were believed to be descended from a very ancient tribe called the Wealceringas, and the name is considered to be one of the oldest in England. Their early records have been obscured but in the 12th century, they were recorded as landholders in Yorkshire.

"This name is mainly characteristic of the midlands and of the north of England. It is comparatively infrequent in the counties between the Wash and the Thames. It is absent or rare in the southern part of England south of a line joining the mouths of the Thames and the Severn. Its great home in the midlands is in the counties of Derby and Nottinghamshire. In the north it is most frequent in Durham and Yorkshire." [2]

One of the first records of the family was Richard le Walker, rector of the church of St. Elphin, Warrington, Lancashire in 1396. [3]

Early History of the Walker's family

One relatively recent invention that did much to standardize English spelling was the printing press. However, before its invention even the most literate people recorded their names according to sound rather than spelling. The spelling variations under which the name Walker's has appeared include Walker, Walkere and others.

Distinguished members of the family include Sir Edward Walker (1611-1677), Garter King of Arms in 1676; Robert Walker (c. 1597-1673), an English merchant and politician who sat in the House of Commons of England (1640-1643) and (1661-1673), a strong Royalist during the English Civil War; Robert Walker (1599-1658), an English portrait painter, notable for his portraits of the "Lord...
Another 59 words (4 lines of text) are included under the topic Early Walker's Notables in all our PDF Extended History products and printed products wherever possible.

Migration of the Walker's family to Ireland

Some of the Walker's family moved to Ireland, but this topic is not covered in this excerpt.
Another 135 words (10 lines of text) about their life in Ireland is included in all our PDF Extended History products and printed products wherever possible.

Walker's migration to the United States +

At this time, the shores of the New World beckoned many English families that felt that the social climate in England was oppressive and lacked opportunity for change. Thousands left England at great expense in ships that were overcrowded and full of disease. A great portion of these settlers never survived the journey and even a greater number arrived sick, starving, and without a penny. The survivors, however, were often greeted with greater opportunity than they could have experienced back home. These English settlers made significant contributions to those colonies that would eventually become the United States and Canada. An examination of early immigration records and passenger ship lists revealed that people bearing the name Walker's arrived in North America very early:

Walker's Settlers in United States in the 17th Century